Contractions and Snake-Crawls: All Regions

When we bunch up our fingers, bringing them closer together than their normal semitone separations, we call this a “contraction”. A contraction is thus the opposite of an extension. The uses of these two words to describe our left hand movements on the cello are unfortunately quite misleading in the sense that the ways they affect our hand at the cello are the exact opposite of the effects that we associate with them in ordinary life. Let me explain.

The word “extension” usually has positive connotations: of freedom, looseness, success, expansion, improvement, extending frontiers etc. When we extend something, we usually think that we are “opening it up”. When we extend a muscle, we stretch it, and we normally think of this stretching as having a loosening, relaxing, invigorating action. Extensions on the cello are however everything but that! (see Extensions/Hand Size).

In contrast to this, when something (anything) contracts – economies, building materials, fabrics, tolerance –  it is usually considered as a negative, undesireable phenomenon. A muscular contraction, for example, is a tight, painful thing, associated with ideas of discomfort, effort and tension. But once again (just like for the word “extension”), the situation for our left hand at the cello is in fact the complete opposite. Having our hand “contracted”, with the fingers bunched up together, each one touching its neighbours, is actually not only our most relaxed, comfortable, effortless, tension-free posture but is also our strongest and most stable! For these reasons, the contracted hand posture is not only our ultimate, ideal, resting posture, but also our ultimate ideal playing posture!!! These two postures could perhaps be more appropriately renamed as the “power posture” (contracted) and the “danger posture” (extended).

The size of any contraction can be measured in semitones. In the Neck and Intermediate regions the biggest contraction we can do is of one tone, after which our contraction becomes a finger substitution (and after that it converts into a scale/arpeggio-type shift [see below]). In thumb position however, our contractions can be much greater because of the much greater distance range between thumb and higher fingers. The greater the size, the more potentially difficult and destabilising they become, and the more time we need to be able to do them securely.

THE USES OF CONTRACTIONS

We use contractions much more often than we probably realise, because in several of their most common uses (vibrato and shifting – see below) we don’t actually sound the notes of the contracted fingers.

While we often need to maintain our hand posture in the “extended position” for long periods of time, we might think that we basically never play for more than an occasional moment in our “contracted position” (with a hand range of less than a minor third). Closer study reveals however that this is not true in the sense that, whenever we have a “long note” – and this happens an awful lot – we will tend to relax the hand into its compact, contracted position with all the other fingers bunched up around the playing finger. We do this because the extreme comfort, strength and stability of this posture greatly favours a beautiful, warm, healthy, stable vibrato (see the Vibrato page). This is, surprisingly, probably the most frequent, common use of contractions.

Apart from that, contractions are most frequently used as a component of (or as an alternative to) shifting, and for playing “squeezed” fifths. Let’s look now at these situations in detail:

2: CONTRACTIONS AS A COMPONENT (FACILITATOR) OF SCALE/ARPEGGIO-TYPE SHIFTS

The scale/arpeggio-type shift is basically just a contraction movement that is continued further and further in the same direction as illustrated in the following sequence.

In the above examples we can see that, as the simple contraction movements of bars 2 and 3 (of both lines) amplifies, it becomes a Finger Substitution. As this movement continues even further in the same direction it becomes a scale-arpeggio type shift.

3: CONTRACTIONS AS A COMPONENT OF SAME-FINGER AND ASSISTED SHIFTS

The great strength and stability of the compacted hand posture greatly favours secure comfortable shifting for all shift types. No matter what the finger choreography, bunching the other fingers around the shifting finger always gives us a nice feeling. In same-finger shifts we probably do this without noticing, but in assisted shifts we may need to be more consciously aware of the possibility (and possible utility) of placing the “new” (target/destination) finger on its “intermediate note” in a contracted position. This means that we will place it on a note which doesn’t actually correspond to the one we would theoretically expect according to our normal uncontracted playing position. This is best illustrated with an example:

This use of contractions will be interesting mainly to very-small-handed cellists.

4: CONTRACTIONS AS A COMPONENT PART (HALF) OF SNAKE-CRAWL MOVEMENTS

A “snake-crawl” occurs when we combine a contraction and an extension, one directly following after the other. This sequence of a contraction followed by an extension (or vice versa) produces a movement which displaces the hand up or down the fingerboard by small increments (usually a semitone or a tone), but without requiring what we would normally consider “a shift”. In a “normal” shift, the hand and arm move together as a unit, but when crawling, one finger is always “still”, as if it were an “anchor”, giving our hand both physical stability and a stable positional reference from which to stretch or contract to the next position. Snake-crawls constitute one of the most obvious uses of our contractions because here – unlike for the use of contractions in vibrato and shifting as explained above – we do actually sound the notes that are played by the contracted finger(s).

The subject of snake-crawls is a big one so it has its own dedicated page (click on the highlighted link).

The “squeezed fifth” is actually a “contraction to the neighbouring string”. Here, we twist the left hand, turning it so the fingertips are now pointing towards the bridge (see photo). 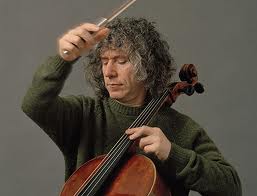 This allows us to play fifths with two different adjacent fingers. It also allows us to do a real vibrato on the fifth, which is especially important in slow double stops and chords. Because of the form (anatomy) of the hand and arm this twisted posture is only practical when we place the higher finger on the higher string and the lower finger on the lower string (and not vice versa). Sometimes this contraction is followed immediately by the relaxation of the hand into the new position (one semitone away from the old position). At other times the “old” finger is maintained stopped and the hand remains in the same “position” (there is no shift).

The smaller the hand and fingers, the more we will tend to use this technique. This is not only because it requires less brute force but also because small fingers actually fit “across” the fingerboard whereas big wide “sausage” fingers don’t. Therefore, cellists with small fingers may find it easier to use the  “two-finger-squeeze” for fifths in which cellists with large fingers may be quite happy to use just the one finger, squashed flat across the two strings.

In some passages in double stops however, even the biggest, strongest hands are no solution and the “fifths-squeeze-contortion” is perhaps the best solution for all hands:

If we take these same passages and transpose them up into the Intermediate or Thumb Regions, we can see that we will use exactly the same “squeezed fifth” technique.