Trills and other Fast Ornaments in One Position

In this section we will be looking at ornaments purely from a technical, mechanical point of view: how to play them fast, cleanly and effortlessly. We are concerned here only with fast ornaments: those fiddly little things that often resemble “tongue twisters”. Usually the difficulties derived from these ornaments are exclusively for the left hand, as most are done on slurred bows and thus do not create problems of coordination between the two hands. They are often a test of our ability to do rapid finger articulations, on the same string and in the same position (with no shifts). For a basic discussion of “fast” playing and coordination problems click on the link.

Birdsong is a beautiful example – taken from nature – of musical ornamentation. It is, at the same time, a wonderful sonic representation of the way these little songbirds fly (dance): flitting and darting about with extreme and sudden changes of velocity and direction. It’s curious how the sounds (music) that different species of animals make, reflect perfectly their physical characteristics, the way they move, and the way they behave. It is as though their movements were a perfectly choreographed dance to their own voice (music) or vice-versa! In other words, we wouldn’t expect an eagle to sing like a nightingale, nor would we expect it to fly like a nightingale. Imagine how surprising it would be if a hippopotamus sounded and moved like a chihuahua (or vice-versa). But sometimes we do have to make our cello – a large instrument – sound as though it were a darting little songbird (violin).

The use of ornamentation reaches its peak in the (late) Baroque and early Classical periods (late 18th century) with the Rococo style. For cellists, Boccherini (1743-1805) is probably the champion in the use of fiddly ornamentation. Amongst the really great composers it is probably Mozart (1756-1791) who most uses ornamentation (see his Violin Sonatas transcribed for cello). If we look at examples of architecture, painting and sculpture from those times, we can see exactly the same phenomenon: ornate, highly decorated, elegant, light, playful, gentle, intimate constructions.

Trills are a frequent component of birdsong and we will continue with this avian analogy. In some phrases a cellist’s left hand soars like an eagle, barely beating its wings. This corresponds to moments in which we have simultaneously very few articulations of fingers, and plenty of time in which to do them: slow, juicy, powerful, sustained melodies. At other times, however (in the case of constantly trilled passages such as in the following examples), our left hand needs to behave more like a hummingbird, beating its wings (the equivalent of articulating the fingers) 50 times per second even just to hover in the same place. In the first excerpt below we are trilling constantly for amost 30 seconds but apart from the trill, the hand barely moves.

The woodpecker – whose pecking frequency is around 20 pecks per second – provides another analogy of the trill taken from the natural world. Another fairly good mechanical trill analogy, taken this time from the inanimate world, could be the pneumatic drill (jackhammer), which actually has a “trilling frequency” very similar to the woodpecker (between 19 and 25 blows per second). The rapid alternations of the hummingbird’s wings, the woodpecker’s beak and the jackhammers point are considerably faster than even the fastest trill.

TRILLS AND THE BOW

In a normal sustained note, any bowchanges that we might make are quite aubible, but if we trill on that same sustained note then any bowchanges become almost imperceptible. This gives us great freedom to both use as much bow as we want (if we want the trill to be louder we can use more bow) and also to go in any direction we might want to. In the Saint Saens excerpt above we can use as many bows as we like/need in the long trills, and in the Dvorak passage some players take two bows on each of the first four notes.

Both trills and vibrato are ornaments and they are in fact very similar in many ways. For that reason, many of these trill-tips are similar to the ideas we use to work on our  vibrato.

So, for a brilliantly fast trill, in which the bow stays smoothly on the string, rather than doing “hard precise work” we need to do the absolute opposite: a “sloppy, fast job”  in which not only is the higher note of the trill not even properly stopped with each articulation but, what’s more, we don’t even need to remove the trilling finger completely from the string. This is a good illustration of a fundamental principle that appears time and time again in cello playing (and in life): “trying too hard has the opposite effect to the one we were wanting to create”. The smaller the up-down movement of the trilling finger, the faster the trill can go. So rather than thinking of a trill as a rapid series of clean, repeated finger articulations, we can think of the trilling movement as a very fast, blurred, vibrato-type whole-hand movement. This is especially so when the trilling finger is the third or fourth finger, because the articulation of these fingers is by nature weaker and slower than that of the second finger.

This “trick” also allows us to do trills from natural harmonics, which can be very useful sometimes, as in the following example from Tchaikovsky’s Rococo Variations:

Not only do we not need to stop the string properly with the top finger, but we can also do the same with the lower (fixed base) finger. Try it. It is surprising how the both notes of the trill still sound true even though neither is really stopping the string. Doing this relaxes our hand, allowing it to trill faster and more effortlessly.

Independently as to whether we play our trills with finger articulation movements or with a vibrato-type movement, we can always usefully work on our trills in a rhythmical, consciously controlled way, in which we gradually increase the trilling speed by rhythmic subdivisions (not by changing the metronome speed): first semiquavers, then semiquaver triplets, then semidemiquavers, then semidemiquaver triplets etc. In the following example we apply this method to the Rococo Variations trill variation (also shown above). The metronome stays on a constant speed: 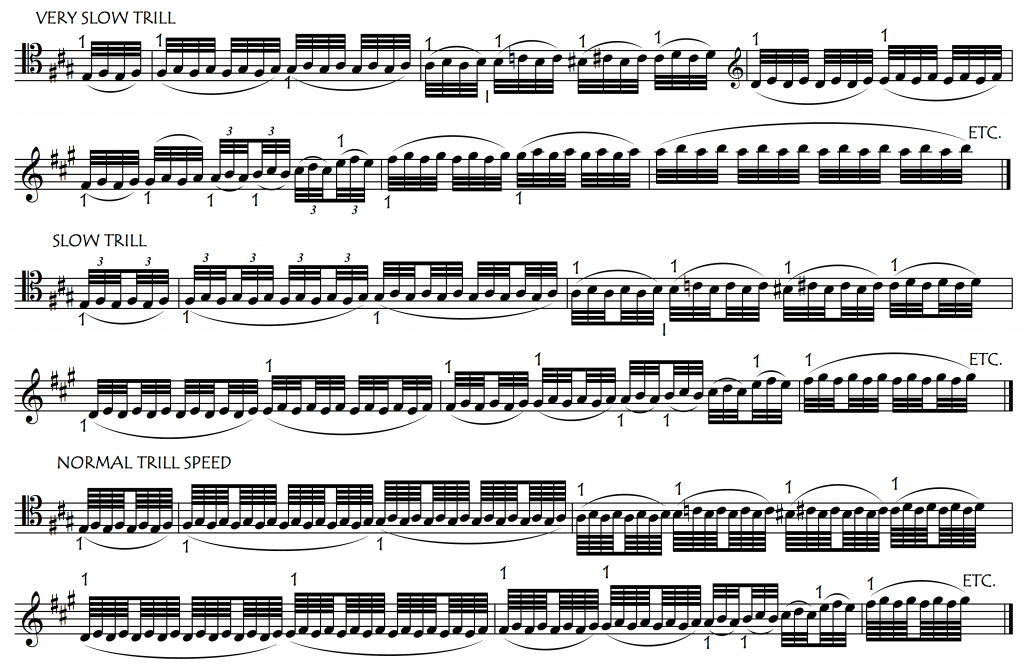 Once again we are reminded of the similarities between trills and vibrato as this type of rhythmic exercise is equally useful for working on our vibrato.

THE UTILITY OF RHYTHMIC FREEDOM IN TRILLS

In spite of the usefulness of the above exercise, in a musical situation trills need not always be played at an absolutely uniform speed throughout the note. In fact, just like with vibrato, variations in trilling speed constitute a powerful expressive device. Starting the trill slower and then getting  faster doesn’t only add interest and intensity to the note but also makes the trill technically easier, preventing us from getting tangled up and tense at the start of the trill. This applies equally well to quite short trills as to longer trills. With short trills we can even sometimes start them a little early with a two-note anticipation in order to avoid getting tangled up with our fingers:

Slowing a trill down towards the end – especially in longer trills with a ritardando – can also produce a powerful expressive effect. In this way the speed of the trill reflects and observes (obeys) the musical ritardando (Vivaldi: Sposa)

Any hand discomfort, tension or strain will disturb the trill, slowing it down and/or making it irregular. Therefore it is helpful – especially for the small-handed cellist – if we can finger the trill in such a way as to have only a semitone between each finger, thus avoiding doing trills in extended positions. Even in the Intermediate and Thumb Positions a small-handed cellist may prefer to finger a one-tone-trill with the “1-3” finger combination rather than “1×2” combination.

This idea becomes increasingly useful as we go lower on the fingerboard (where the distances are larger):

In the Intermediate and Thumb regions we will often try (where possible) to refinger passages in order to convert 2-3 tone trills into 1-2 (or 1-3) trills in order to reduce hand tension. Often however this is not possible:

For a small or inflexible hand, even the 2-4 tone in the lower neck positions can create enough hand strain to disturb the ease of the trill. Compare the relative comfort of the one-tone trills in the following examples. Try them using both the 2-4 and 1-3 fingerings.

We have two possibilities to deal with the awkward tension of 2-4 trills:

Having the first finger on the lower (base) note of the trill definitely makes trilling easier. In the two extended repertoire trilling passages at the top of this page (Dvorak Concerto and Rococo Variations), most cellists will start all the trills on the first finger. Try these passages with the second finger as the base finger for all the trills to see just how much more uncomfortable and difficult this is.

TRILLS ON THE THUMB

THE SIGNIFICANCE OF WHAT COMES AFTER THE TRILL: USING THE THUMB ON THE TURN

What happens immediately after the trill also affects the difficulty of the actual trill. Trills often end with turns, and if a one tone trill ends with a turn to the note one tone below, then this automatically requires an extension. This extension can disturb the trill because it creates tension near the end of it. Many fine cellists use the thumb to play the turn after the trill even in the Neck Region. This use of the thumb not only eliminates the need for an extension, it also allows us to use the first finger as the base finger for the trill.

Try the following exercise through all the fingerboard regions and with different fingerings. Trilling with the first and third fingers (and using the thumb on the turn) definitely involves less tension than trilling with the 2-4 combination (and using the extended back first finger for the turn). This reduction in tension gives more speed, fluidity and ease to both the trill and to the turn.

Often in fact a trill is only the first part of a larger ornament that extends over a wider range – usually a fourth. For violinists and pianists this is not a problem, but for cellists it often is a big problem as we need to shift (or use the thumb) in order to be able to cover that range. Transpose the following “standard” ornaments all over the fingerboard (Neck, Intermediate and Thumb Positions). For such simple (but unergonomic) figures there are a surprising number of different fingering possibilities that can be tried, especially when we use the thumb on the lowest note.

Sometimes our fingers are just not fast enough to successfully and reliably play the composers desired trills. This situation is especially common when playing music conceived for less resistant (faster) instruments such as the violin, piano, flute etc. It’s a little bit like a hippopotamus trying to be a hummingbird: the cello is a much heavier animal and sometimes these zippy little ornaments are just too fast and fiddly for us. Rather than messing up the trill(s) it is probably preferable to simply do a shorter, easier ornament such as a turn or –  even shorter and easier –  a mordent. This “editing according to our ability” can even be useful in pieces that were written originally for cello: