Traditional fingerings, as seen especially (but not exclusively) in many older editions of cello music (repertoire, methods, studies etc), often favour stretching (extensions) over shifting. Basically, according to tradition, if we can reach a note by stretching for it, then that’s what we should do in order to get to it: stretch for it instead of shifting the whole hand/arm.

This might make theoretical sense for an energy conservation engineer because it’s true that moving the whole arm up and down the fingerboard more than strictly necessary certainly requires more movement and appears to require more energy than just using the closest finger. However, economy of movement and energy are not a musician’s principal objectives. Our principal objectives are musical: we want to have both a beautiful sound and easy control of rhythm and intonation. In order to obtain these musical objectives, it helps enormously if our left hand is as comfortable and relaxed as possible on every note, and one of the best ways to achieve this state is by avoiding extensions, even if that means moving around more on the fingerboard. Economy of movement and energy can easily lead to tension and rigidity, whereas movement tends to create fluidity and flow. So let’s compare these two absolutely fundamental and absolutely contrasting basic fingering principles:

1: old-fashioned, mechanical and tense: “always use the closest finger, and shift as little as possible”
2: modern, vocal and relaxed:  “it’s better to maintain relaxed postures by moving around more, rather than to be stuck in tense, strained (extended) postures“.

To be invited to put the fingerings into an edition of cello music it almost certainly helps to be a very fine cellist. One of the main prerequisites for being a fine cellist is to have a good wide hand. Therefore most cellists who write the fingerings in cello parts have big hands. Even for a cellist with big flexible hands, “traditional” fingerings may not always be the most body-friendly (ergonomic), but certainly for cellists with small hands, many traditional fingerings – full of extensions – are truly a nightmare and are a guaranteed recipe for bad intonation and ugly sound. To avoid this problem, the fingerings suggested in the “edited performance editions” of music available on this website (see Repertoire Library) are all designed for the small-handed cellist, and may not be appropriate for the lucky large-handed variety.

A big hand for a cellist is like long legs for a runner. In the same way that a long-legged person can cover more distance with fewer steps than someone with short legs, a cellist with a wide hand and/or long fingers can more comfortably use bigger strides (extensions) to get around the fingerboard than a small-handed cellist. But if we don’t have this big powerful hand, what can we do? We can learn a lot about how to avoid extensions by studying not just runners, but also double-bass players, who basically run up and down their enormous fingerboard with their left hand all day. Playing the double-bass exaggerates the problems of extensions on the cello: it’s like playing a big cello but with a tiny hand.

The small-handed cellist, like a double-bass player, has two main possibilities to avoid the strain of extensions:

This is the equivalent for a runner of taking more and smaller steps. The small hand (like the short runner) will need to compensate for its lack of size by being especially agile and fit. Leo Messi is a magnificent football (soccer) player. He is also very short – they call him “The Flea” – but incredibly fast and agile. Perhaps he takes twice as many steps as Zinedine Zidane (who has very long legs) to cover the same distance …………  but that is absolutely not a problem. Look at the following examples: the arrows in the second line indicate shifts (instead of extensions).

This idea is not only valid for faster passages. In slower, lyrical, expressive passages the tension created by an extension can ruin our vibrato and our gorgeous sound. This is a great shame and, what’s more, completely unnecessary as in slower music it is even easier to apply this principle of “shifting more often” than in fast music (because in slow passages we have so much more time to shift between the notes). Rather than a physical effort, refingering with more shifts to replace the extensions just requires a little thinking effort … a little awareness …. a change of mindset, in order to not do the automatic fingering of “use the closest finger and shift as little as possible”. The following repertoire example is from Mendelssohn’s “On Wings of Song”:

Slow passages that we would normally play in one (extended) position can actually be played with semitone hand shifts instead of extensions. In the following examples the arrows indicate where we should shift:

And here are some more musical examples in which, instead of playing in an extended position, we could do semitone shifts within that major third hand range, in order to give us the best possible vibrato. Once again, the arrows indicate shifts:

All of the above examples are slow. But the relaxation benefits obtained by shifting instead of extending are also useful in faster music, even though the need for a warm loose vibrato is somewhat less than for slower music. Even some of the most simple passages in extended first position in Pre-Romantic music can benefit from this same principle of “shift more often = fewer extensions = hand more relaxed”:

And one last example ….. 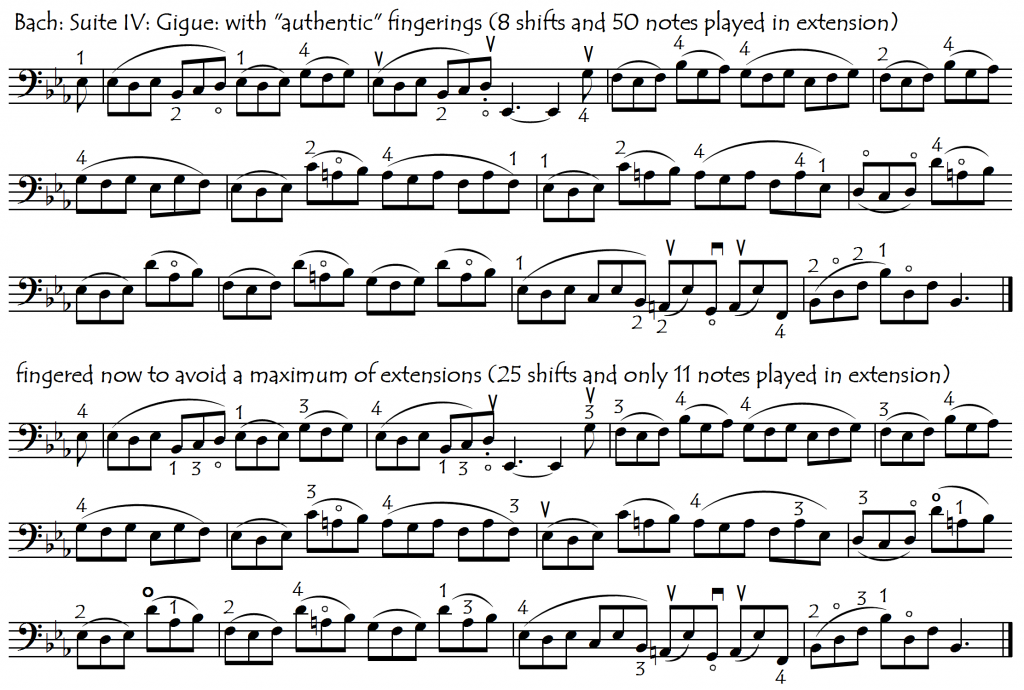 3. USE THE OPEN STRING TO DO A SEMITONE SHIFT WITHOUT MOVING THE THUMB

The thumb – when used on the fingerboard  – is almost like a “magic finger” in its ability to remove and/or facilitate extensions. Magicians use “sleight of hand” to do their tricks: cellists can use sleight of thumb – thumb magic – in order to be able to make big stretches/strides/steps suddenly strain-free.  To continue with the sporting analogy, the cellist’s use of the thumb as a “magic finger” to facilitate extensions is like the a high-jumper’s use of a pole as a “magic leg” to be able to jump higher (pole-vaulting)!

The thumb can be used to avoid extensions all over the fingerboard but is especially useful in the Intermediate and Thumb Region because, in the Neck Region, the use of the thumb is usually quite uncomfortable. For lyrical, expressive passages that require vibrato in this fingerboard region, the solution to avoiding the excessive hand tension caused by extensions is usually to shift more rather than use the thumb (see above). However in passages that don’t require great lyricism or vibrato the thumb can once again give us some magical solutions. See Thumbposition in the Neck Region.

Many uncomfortable Neck Region passages with difficult extensions can be converted into comfortable passages without extensions simply by playing them higher up the fingerboard, in Thumb Position in the Intermediate Region, on the next lower strings:

The ability of the hand to open (extend) between fingers and thumb is incomparably greater than its ability to extend between different fingers. In the Intermediate and High regions of the fingerboard, the reduced distances between the notes mean that both thumb-use and thumb extensions become incomparably easier than in the lower positions. This means that whereas in the Neck Region, we use the thumb to avoid extensions mainly in faster, non-lyrical passages, up high we can use the thumb in just about any type of passage.

The most common extension that we may want to avoid through judicious use of the thumb is the 1-3/4 major third. There are two principal ways in which we can use the thumb to avoid these extensions.

Our choice as to whether to avoid extensions by shifting more or by using the thumb more will be determined by two factors:

Therefore, in the Neck Region, we may favour shifting over thumb use as an extension-avoiding technique, whereas in the Intermediate and Thumb Regions we may favour thumb use rather than shifting.

For more examples of fingerings-to-avoid-extensions see, the following pages: