Leaping across multiple strings is like jumping across a mountain creek – we normally don’t want to get our feet wet (touch the middle strings). Let’s continue with this hiking analogy.

A leap is basically a combination of a horizontal step and a vertical jump. When we do a “step” with our legs, there is always at least one foot in contact with the ground (because the back foot doesn’t leave the ground till the front foot has landed). In a “leap” however, we spend some time totally in the air, with neither of our feet touching the ground. Even though it might be possible to cross the creek with one big step, we will certainly be able to go further and faster if we add that vertical “jump” component, leaping instead of stepping.

On the cello, the “jump” is our vertical spiccato bounce, while the “step” is our horizontal bow displacement. Just like for the hiker wanting to cross a stream, bringing our bow from one string across to a non-adjacent string is, as indicated by the word “leap”, easiest when done with the bow in the air. In other words, crossing multiple strings that we don’t want to touch (hear) is normally easiest when we can do it with the bow in the air.

Sometimes however this is not possible, appropriate or even necessary. If we need to land with great delicacy and control, it will be normal to take a “step” rather than a “leap”: we are very far from the world of spiccato here. This situation occurs commonly in legato passages involving chords such as in the Sarabandes from the Bach Cello Suites (here, the beginning of the Sarabande of the Sixth Suite). For more discussion of this, see “Crash Landings” at the bottom of the page and Chords.

There are several different factors that we need to look at when studying leaps across several strings:

If our jumps across the middle strings are all spiccato, not too fast, and come on the favourable clockwise-loop bow-stroke direction (see String Crossings, Spiccato, and Bow Physics) then we can be grateful: leaping across strings doesn’t get any easier than this. Unfortunately, in musical situations, leaps come in all imaginable shapes and sizes (articulations and rhythms) as well as in favourable and unfavourable bow directions. Those spiccato leaps which come on the unfavourable bow direction are slightly harder, as here we are working against the natural tendency of the bow (leaping backwards is harder than leaping forwards).

There is no point practising “leaping passages” with legato slurs because the middle string(s) will unavoidably be sounded. We can however practice them with separate and portato bow strokes, in which the bow stops its horizontal movement during the string-crossing.

The following exercises should be practised starting with both upbows and downbows. We could always start with the simplest, easiest version of each exercise by using only open strings (therefore with no left-hand complications). These however sound so ugly and are so boring that we probably won’t feel very inspired to practice. To avoid this problem, the exercises are presented here with pleasant, enjoyable harmonic (note) progressions.

These exercises work on leaps over only one middle string. We can also follow exactly the same principles and use an interval of two octaves to work on our leaps over both middle strings (leaping between the A and C strings):

Look at the Three-String Chord Chart and Four-String Chord Chart pages for some pleasant harmonic sequences on which to practice the following “Sevcik-style” bowing variations. These are just a few of the huge number of possible configurations. 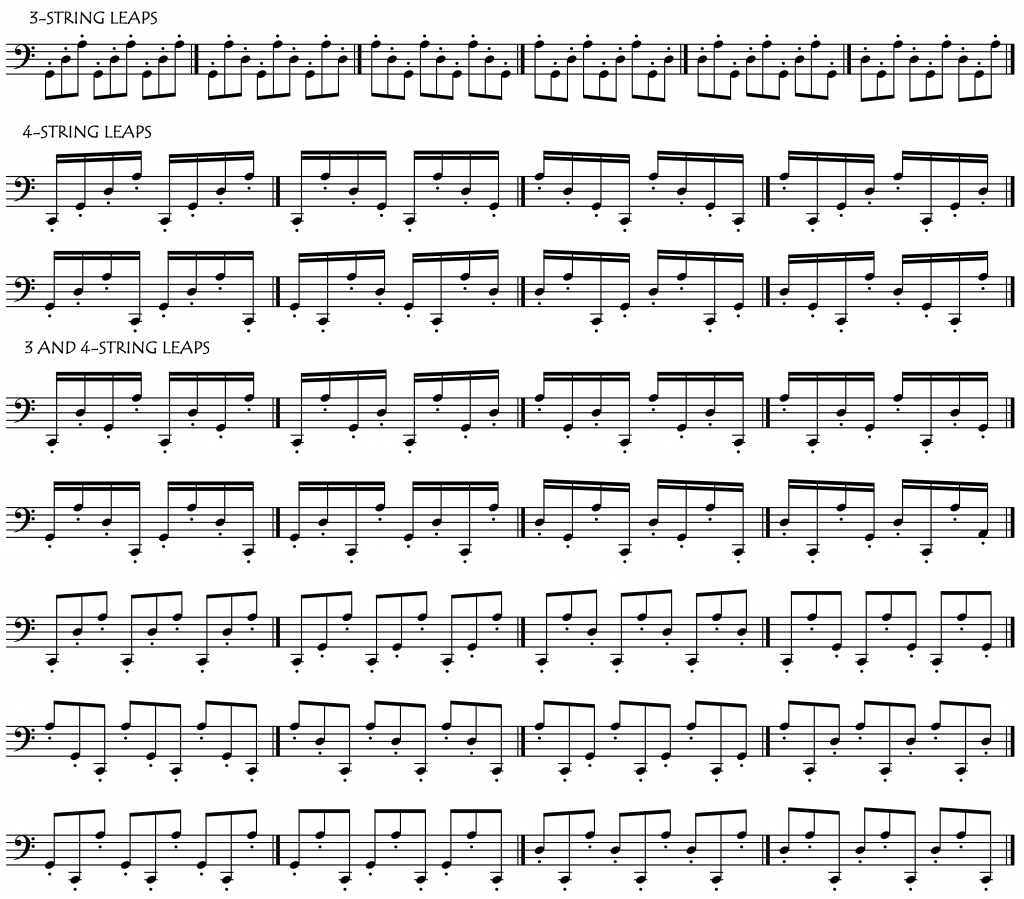 As mentioned above, legato leaps are much more difficult than spiccato leaps as we can no longer leapfrog over the middle string(s) and thus have to “do magic” to avoid sounding the middle string(s) with the bow. If our bow direction is favourable this task is made slightly easier, but if the bow direction is unfavourable we are going to have to be very good at sleight of hand. The following examples illustrate these four different combinations of  factors in increasing order of difficulty:

Most composers know that it is impossible to write a fully legato (slurred) leap across several strings. If a composer were to write the above excerpt with the leaps fully slurred this would reveal a lack of knowledge about how to write for string instruments. Brahms, when he wants some big legato leaps in his E minor cello sonata, carefully writes out the notes that he wants to sound on the middle strings during the legato crossing.

We could call these added notes “intermediate notes”. They are like stepping stones, converting an impossibly wide leap across a river into several comfortable hops. They have a similar function to the intermediate notes that we often use in shifting: helping to make a difficult transition easier. But composers are not always so “user-friendly”. More often than not, they don’t write out these string crossing intermediate notes, simply because they don’t understand the mechanics of string playing. How can a (non-cellist) composer really know if a big leap that he writes will be done as a shift to the adjacent strings or as a leap across a middle string obstacle ? This is asking too much.

Composers write the sounds they want to hear but it is up to the playing musician to decide how to achieve these sounds in the best way possible. Therefore, when faced with a difficult or impossible slurred or legato leap, we cellists may want (or need) to take the liberty of doing the same as Brahms did in the above excerpt: discreetly adding the notes on the middle (intermediate) string(s) that fit into the harmony. This will make our string crossing leap easier, which usually makes the music sound better also.

Having decided which intermediate notes to play (they need to fit in with the harmony) we then need to decide where to place them (rhythmically). Here we have two possibilities:

Even when the leap is not slurred, we may still want to make use of the intermediate note(s) simply to make the leap less “traumatic” even though it may not be strictly necessary. This is especially helpful when the leap comes on the unfavourable bow direction and not only makes the leap easier (no longer a leap in fact) but also allows us to slur the crossing should we wish for a more legato articulation:

DOUBLESTOPPED LEAPING: DOUBLING THE SIZE OF THE TARGET

Leaping around in doublestops is much easier than single-note leaps because doublestopped leaps don’t require as much accuracy in our bowlevel control as when we have to land cleanly on only one string at a time. The fact that we are landing on a doublestop means that our “target” is huge. For this reason, doublestopped leaping exercises are an excellent component of our righthand warmup.

CHOICE OF LEAPING STYLE: LEGATO OR ??

Sometimes, the presence of big leaps across strings is almost proof that the composer didn’t imagine the passage played legato. This is especially so in Pre-Romantic music where the natural bowing was not in fact legato and composers used dots only exceptionally, to indicate the very shortest notes. When we play the Prelude to Bach’s Fourth Cello Suite with a legato bowing style – as many people have done and still do – we are creating a lot of problems for ourselves (and for the music) because those leaps across four strings are basically impossible to do cleanly and simultaneously legato. Even such a magnificent cellist as Danil Shafran suffers a lot, regularly touching the middle strings with his bow and thus sounding undesired “parasite” notes that don’t fit in with the harmony. In the days of Bach, the cellist would no doubt have played this piece with quite separated bow strokes, with the legato effect coming mainly from the echo in the church acoustics. If we want the same effect nowadays in a dry acoustic, we could perhaps use the “addition of double-stops” trick to simultaneously facilitate the legato string crossings and add resonance and harmonic richness.

To see the whole Prelude written out in this way, open the following link:

We often have a choice as to whether we finger a large interval either across the strings (with a bow leap) or to a neighbouring string (with a shift or double extension). In this way we can displace the “difficulty” between the right and left hands at will: leaping across strings is a bow difficulty while playing the large interval on neighbouring strings is a left-hand difficulty. For a large legato interval we will normally try and shift to the adjacent string as this allows us to really connect the notes. But at other times the choice may not be so clear. This situation is especially common for passages in octaves. How would we finger the following passage for example ?

Here is another Beethoven Sonata example of a passage in octaves for which we also need to decide “to leap or not to leap ?”

In this passage however, the tempo is slower so we now have enough time to play the octaves leaping across the 3 strings. What’s more, the melodic line moves around so much that playing this passage “in octaves” (on only 2 strings and with the use of the thumb) would be very difficult. The bow leaping is made easier if we use an up bow on the lower notes. With respect to the rhythmic pulse, this is a “reverse (or “backwards”) bowing because the accents (beats) come on the up bows (and we would need to take the last 2 semiquavers on two upbows). But with respect to the bow’s bounce and mechanics, it is an ideal bowing. We can experiment and see which one suits us – and the music – the best.

BOW FOR THE BEAT OR FOR THE LEAP?

In the above example, the ideal “bounce bowing” (starting upbow) is not the same as the ideal “beat bowing” (starting downbow). However because this passage is not fast, our reverse bounce is not going to be such a problem and we might therefore choose to favour the accents by starting on the down bow. But let’s imagine now that Beethoven had written the following:

CONTROLLED LANDING OR CRASH LANDING AFTER A LEAP

It is very difficult for a gymnast to do a gentle controlled landing after a spectacular aerial manoeuvre. We have the same problem with our bow after a big fast leap. To say the same thing with other words, fast leaps across several strings pose special problems when we need to do a soft landing, especially when we are landing at the frog or the lower half of the bow. When chords ornament a melody on a top string (as occurs so often in the solo string music of Bach), it is so much easier to hit the bottom notes of the chord hard than to play them gently. This is why the chords in Bach are often played dramatically and energetically even when the music wants to be gentle.

There are several solutions to this problem.

These “anti-crash” techniques are especially appropriate for the Sarabandes. Try the Sarabande of Bach’s Sixth Suite like this (2nd example) to see how it gains in gentleness, delicacy and ease of control:

Here below are links to downloadable/printable practice material for working on this skill.