This article is a continuation of the Bow Changes, Starts and Stops page. For a discussion about the different ways of starting our bowed sounds from a “Musical Language” point of view, see the “Articulation” article

Clearly articulating a new bow stroke is the equivalent of tonguing for a wind instrument, or of starting a word with a hard consonant for a singer (or speaker). For clean, crisp bow starts (articulations) – the opposite of legato smoothness – it is important that the bow be gripping the string before we start the note. Like that, the new bow stroke begins actually with a sudden release of pressure, a mini-explosion, just like in pizzicatos. This is especially noticeable (and necessary) in dotted rhythms that we play with “hooked” bowings. Here, in order for the rhythm to be clear and precise, we need to grip the bow well into the string before sounding the short notes, as in the following examples:

If on the contrary, we wish to start our new bow stroke smoothly, we need to connect it perfectly, imperceptibly, to whatever came before, whether that be a previous note or simply a silence. Loud, accented starts after a silence are not usually particularly problematic, but gentle, quiet beginnings coming out of nowhere (after a total silence) can be quite awkward to control. This difficulty increases as we get closer to the frog. Singers (and wind players) can teach us a lot about these. When they want to start a note imperceptibly after a silence (da niente) they start exhaling (blowing into their instrument) before starting to sound the note. Sitting directly in front of a flute player as they come in with a delicate entrance makes this very obvious. For us string players it can also be helpful to exhale before our delicate bow-starts, but for totally different reasons (click on the highlighted link). What we can learn from singers and wind-players here is not about our breathing but is rather about our bow and right-arm, which are the equivalent to the singer’s breath (or to the wind-player’s airflow).

In the same way that the singer and wind-player anticipate the flow of air through their instrument, the secret to beautiful, imperceptible starts (and bowchanges) for string-players is also to anticipate them (start preparing them before we actually need to sound the note). We can do several preparatory actions, all of which need to be done, by definition, in anticipation of (before) the true rhythmical start of the note. These possible movements, in order of execution, are:

Let’s look at these movements now, one by one:

This converts a bowstart into a sort of bowchange and its benefit comes from the fact that our bow and arm are in movement before our bowstart, rather than just waiting immobile (see below). With this upbeat movement, we are now in motion, and it is when our suspended bowarm is in motion that we loosen up. It is to avoid this risk of “freezing” (rigidity) that we don’t usually place the bow on the string until a very brief moment before we start playing (see below).

For every type of note-start except spiccato and ricochet – and especially for our gentle starts – we will place the bow silently and very gently on the string just a brief moment before we start to sound the note (see “Bow Trajectory From The Air). In this way, we establish and confirm the position of our hand and bow on the string, and prepare both ourselves and the string for its “awakening”. We don’t want to do this too early because we run the risk of getting tense while trying to hold the bow immobile on the string and inadvertently making a sound.

Violinists and violists can do a much larger preparatory movement than cellists (and bass players) because, unlike us, their instrument is not attached to the floor. This allows both their instrument and upper body (entire body if they are standing up) to move freely in every direction. While their preparatory movement before a bowstart doesn’t quite reach the category of a “swing” (it is smaller and slower) it does resemble something like a dance, in which both instrument and player are in harmonious, relaxed, active motion before they actually start to sound the note.

The movement possibilities for cellists to prepare our bowstarts are unfortunately much more limited in every way. Our instrument is attached to the floor and we are sitting down, so our dancing possibilities are severely restricted. One preparatory movement that we can do is a silent movement of the elbow which, after our placing of the bow on the string, precedes any horizontal movement of the bow or any actual sounding of the string. This movement is more or less vertical and involves raising the elbow away from the body before the initiation of the downbow, and letting it fall down towards the body before the start of the upbow. In this way, it is our elbow that starts the bowstroke after a silence, setting the arm in motion and then sweeping the hand along with it. The term “sweep” is quite appropriate because this is rather like the movement of a broom: on the downbow we pull the broom (elbow, bow) to the right of our body, and on the upbow we push it towards the left. It is as though our elbow movement “breaks the ice” of a posture that might have become somewhat frozen with the tension of waiting for the start of the note (see “Upbeat” above). Compared to the golfer’s swing and the violinist’s dance, this little “elbow-sweep” is small, but it is nevertheless extremely important, as it is all we have to fulfil the vital function of the “lead-in” that is so important for fluid, flowing movements.

This anticipation concerns the very discreet, almost inaudible sounding of the note slightly before its exact rhythmical moment (basically a fade-in).

For a lot of gentle, lyrical music, an exact start to the notes is often undesirable because it not only causes tension but also makes us sound like a computer. We need to banish the binary switch concept of “off-on” or “yes-no” from our smooth note starts, replacing this with something more artistic and fluid. The idea of a light-dimmer comes to mind, but we can find more inspiring imagery, especially in nature and music. The most beautiful, delicate events in life usually start (and finish) gently: a caress, dawn and sunrise, sunset and nightfall, the change of seasons, the ocean tides, a landscape with gently rolling hills or the gentle strumming of a guitar accompaniment. The “changes” here are gradual: they have soft, rounded edges and blurred boundaries.

In total contrast to this are the abrupt changes of a rugged mountain landscape, an electrical switch, and of a lot of 20th-century architecture, furniture, art, music, and industrial production. Here, the changes of direction are characterised by sharp, straight, hard angles and highly defined contours (edges). These can create dramatic and spectacular effects but tend to be threatening, imposing, challenging, triumphant and unforgiving rather than gentle, comforting and accomodating. It would be hard to find two better musical examples to illustrate these totally contrasting concepts than a comparison of the first solo entries in the Dvorak and Schumann concertos.

In our Dvorak entrance, we need to start with the rhythmical precision and clarity of a gunshot. But in Schumann’s soloist entry we need to start our note with a smooth lyricism that is exactly the opposite. In both cases however – in another example of the absolutely basic Anticipation Principle – we will need to place the bow on the string before the start of the note. This placing of the bow on the string before the note-start is not only essential for soft gentle beginnings but, surprisingly, for almost all note-starts that are not ricochet or spiccato. Even a sffz attack will normally need to start with the bow on the string previously. See the page Bow Trajectory From the Air for a detailed discussion of this subject.

How can we practice our bowstarts in the most efficient, concentrated way? It’s easy: with portato and staccato exercises, in one stroke (literally) we can do a whole lot of bowstarts.

While portato bowings work on our gentler, smoother starts, staccato bowings do the same for the more articulated, cleaner starts. For our crisp clean starts, we can simply do the same portato exercise but now with staccato dots on each note. With staccato articulations, we will be able to cram more notes (starts) into each bowstroke than in the portato because each note uses less bow in staccato. We can also have a faster note-speed with staccato than with portato. 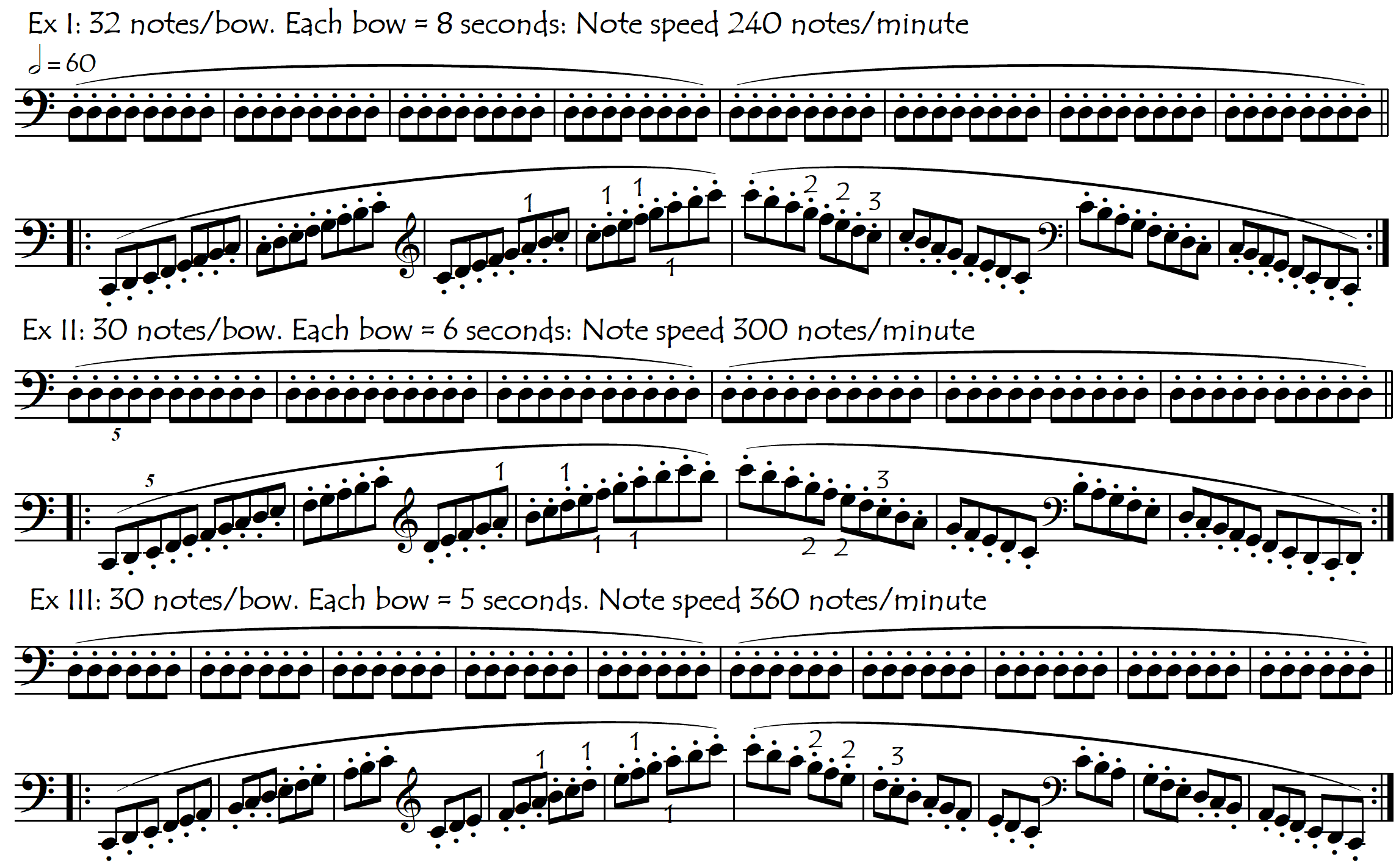 But in both cases (portato and staccato) this is an ultra-efficient way to work on our bowstart skills as it not only crams many starts into each bowstroke but also does them in every different part of the bow and in both up and downbow directions.

A SPECIAL BOWSTART SITUATION: SMOOTH STARTS FROM THE AIR

During silences, we normally take our bow off the string. This is for two main reasons:

The fact that we take our bow off the string in silences means that smooth starts after a silence are normally “from the air”, requiring the placing of the bow on the string just before we start to “play” (sound) our starting note. This adds another degree of complication to our smooth-start process.

Violinists and violists are lucky because their instrument is attached only to them (and not to the floor). This allows them to accompany the placement of the bow onto the string with a cushioning, downward movement of the instrument. This is a beautiful, dance-like gesture that gives great control over the way the bow starts its stroke.  Unfortunately, we cellists cannot imitate this gesture because our instrument is attached to the floor and has thus no possibility to move in such a way as to accompany (cushion) the placement of the bow on the strings. There are two ways to make up for this lack of cushioning, and thus limit the risk of bumpy landings (and crash landings):

For more about the subject of placing the bow on the string from the air see Bow Trajectory in the Air.