WHAT IS AN ARTIFICIAL HARMONIC?

ARTIFICIAL HARMONICS ON THE FIFTH

The artificial harmonic that is produced when we touch the finger lightly to the string a fifth above the thumb, sounds a note that is one octave above the “harmonic” finger (one octave plus a fifth above the thumb). This artificial harmonic is both easier, safer and more resonant then the one we normally use (on the fourth above the thumb). Try playing some and you will confirm this observation. Why is this ? This added safety, ease and extra resonance are due to the larger distance (a fifth instead of a fourth) between the “stopping” finger (thumb) and the “touching” finger (usually the third finger). The extra length of vibrating string gives simultaneously an added resonance (volume) and a significantly greater margin of error in our thumb-finger relative spacing (before we get that familiar unintelligible squeak).

The above example could be perfectly played with either the standard perfect fourth interval or the more unconventional perfect fifth interval between base and harmonic finger:

If we want to change from an artificial harmonic on the fourth to playing the same note with an artificial harmonic on the fifth, we simply need to put our thumb where our third finger was, and then reach up a fifth for our “harmonic” finger. In other words, if we place our thumb on the note that was played by the higher finger in the standard “on-the-fourth” artificial harmonic then this puts our hand in the correct position to sound the same note but now with an interval of a fifth between thumb and higher finger. Being aware of this can help us read and play with the “on-the-fifth” hand configuration artificial harmonic passages that are notated for the standard “on-the-fourth” hand configuration. We can see that in the above (and in the following) examples.

ARTIFICIAL HARMONICS ON THE MAJOR THIRD

In order to practice getting the distances right between thumb and finger, it will be very useful to practice our artificial harmonics as double stops. For normal harmonics on the fourth, placing the top finger on the higher string (instead of on the same string as the stopped lower finger) gives us an octave interval. So, in fact, all practice of octaves and all practice of “artificial harmonics on the fourth” is perfectly interchangeable and mutually useful (see Octaves). To practice the distance of a fifth above the thumb, we can practice the double stop with the third finger on the lower string and the thumb stopping the higher string. This gives us a unison double stop and no other interval is as sensitive to slight innacuracies of intonation so we will have absolutely no trouble hearing if our distance between the two fingers is correct or not.

WHY MIGHT OUR ARTIFICIAL HARMONIC SQUEAK, SCRATCH OR NOT SOUND?

If our artificial harmonic doesn’t sound (and all we get is a squeak or whistle), this normally tells us that something in the placement of our two fingers is not right. Either the distance between them is wrong, or, for louder playing, the stopping finger is not holding down the string hard enough. We almost always use the thumb as the “stopping” finger, because for a viable, reliable harmonic, the minimum distance necessary between the stopped note and the harmonic is a perfect fourth which, for most hands, is uncomfortable to stretch without the use of the thumb. In order to get a really sure, firm stop of the string with the thumb on the A string we might want to have the thumb only on the A string (and not on both A and D strings) as this allows it to stop the string with the hard edge of the nail rather than with the (often) softer callous.

But this firm stopping of the lower finger (usually with the thumb) is only absolutely necessary if we want to play the harmonic loudly. For soft playing, artificial harmonics can also sound perfectly clearly and cleanly with only a very light pressure of the thumb (or lower finger) on the string, as though that lower finger were also playing a harmonic. We can experiment with just how much thumb pressure is needed to ensure that the harmonic sounds cleanly. This possibility to relax the thumb pressure can make many (soft) artificial harmonic passages (especially those with a lot of shifting) suddenly very much easier.

Another possible reason for an artificial harmonic that squeaks or doesn’t speak can come from our bow. Artificial harmonics do not like to be played sul tasto (with the bow over the fingerboard). In order for them to sound cleanly and resonate strongly, it helps to keep the bow somewhat closer to the bridge than for “normal” notes.

Artificial harmonics sound more easily, and are played more easily (with the simple 1-4 perfect fourth finger distance) on the violin than on the cello. Sometimes therefore, in music transcribed from the violin, the passages in harmonics are too difficult for the cello – usually because they are too fast. We have several alternatives that we can use to avoid the most difficult passages in artificial harmonics:

2: USING SUL PONTICELLO DOWN AN OCTAVE INSTEAD OF ARTIFICIAL HARMONICS OR STRATOSPHERIC STOPPED NOTES

The following example is taken from Sarasate’s Zapateado. In the original violin version, artificial harmonics are used in this passage. In Leonard Rose’s transcription, however, the notes are stopped (and very high). We can reduce our difficulty level even further, without sacrificing much of this special effect, by simply playing the notes an octave lower but “sul ponticello”: 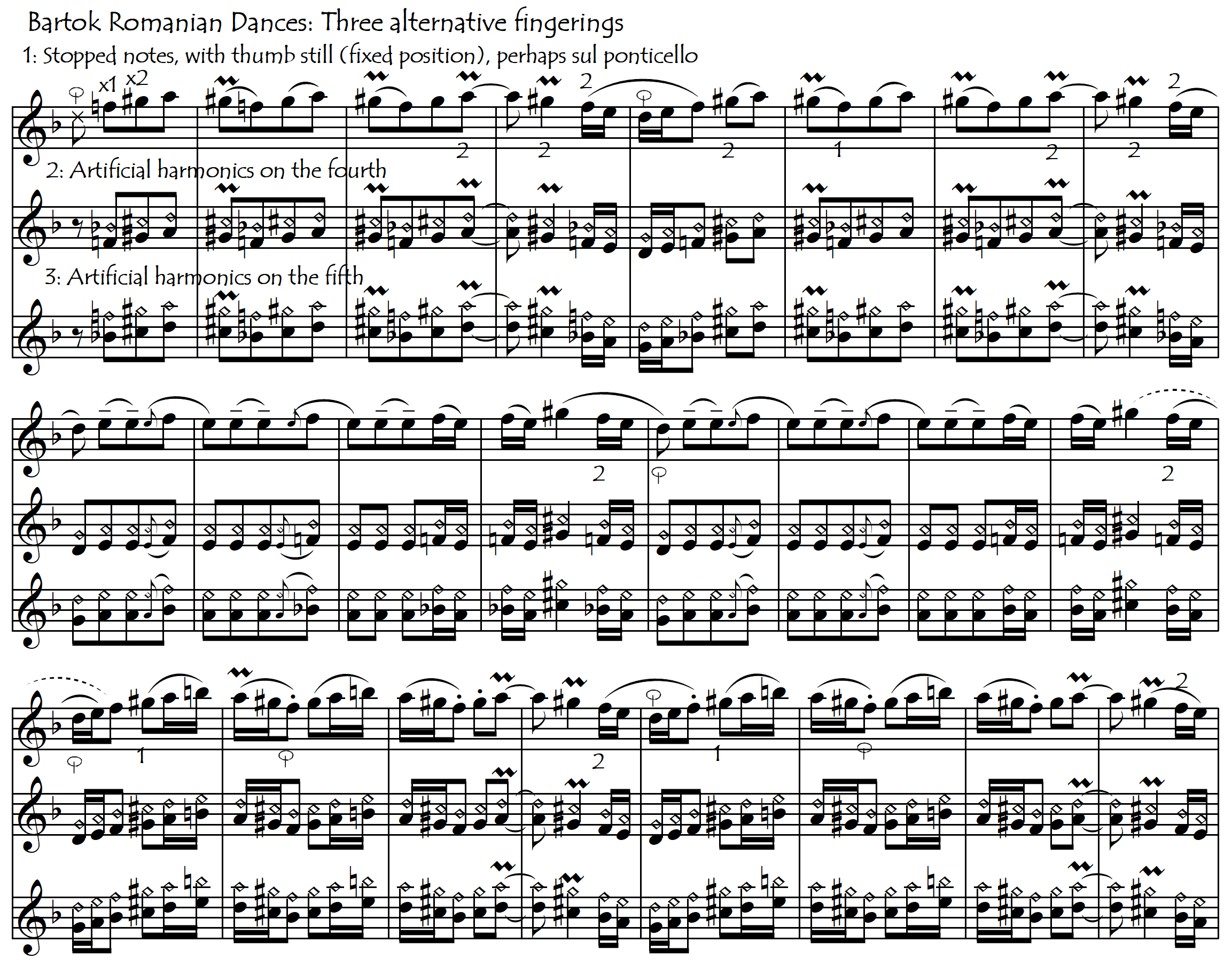 The following link opens up a compilation of repertoire passages using artificial harmonics (and their various substitutes).