This article is a sub-page of the “Choosing Bowings” page.

Normally we plan our bowings to avoid sudden and extreme changes in bow speed (unless deliberately needed for special effects). This planning can be especially necessary for note sequences in which the alternation of long and short bowstrokes creates “unbalanced” figures for which “as-it-comes” bowings (with a simple alternation of down and upbows) would lead either to:

Sometimes, we are lucky and our asymmetrical, unbalanced figures combine in such a way that the passage “plays itself” without us needing to do any complicated planning or bowing tricks. The Courante of Bach’s First Cello Suite is full of these types of happy coincidences:

We will look later in more detail at these fortunate, lucky passages, but first, let’s take a look at those very frequent situations in which we are not so lucky.

Very often, our asymmetrical, unbalanced passages, instead of “playing themselves” will tend to trip us over, tying us in knots if we try and play them with simple “as-it-comes” bowings. The Courante from Bach’s Third Cello Suite, if played with the original manuscript slurs, presents numerous examples of  highly asymmetrical, unbalanced passages that require some serious forward planning and magic tricks:

In order to avoid this very common problem, we have several possible bowing-choice tools (tricks) at our disposition: the retake, playing several notes consecutive notes in the same bow direction (as in hooked, portato or flying spiccato bowings), changing the slurs, or doing none of these “tricks” and simply getting around the problem by using enormous athletic skill and agility (= sleight of hand).  Let’s look now at these different possibilities:

1:   THE RETAKE AS A SOLUTION TO  RHYTHMICAL ASYMMETRY

If we can lift our bow off the string before or after the short note, then this enables us to move our bow, silently in the air, back to where we want it to be. This, along with “hooked bowings” (see below) is one of the easiest ways to solve the problems of bow division posed by repeated dotted figures.

The subject of “retakes” is a large one and has its own dedicated page:

2:  HOOKED (OR PORTATO) BOWINGS AS A SOLUTION TO  RHYTHMICAL ASYMMETRY

In those asymmetrical passages in which the musical articulation does not allow us to lift our bow off the string and thus “retake” it, we can avoid the bunnyhop accents (see below) by using “hooked bowings”. Here, we “hook in” the little note in the same bow direction as the previous longer note. The difference between hooked and portato is simply the amount of connection we have between the notes

The hook/portato is an alternative to the retake. Here below are the same three examples that we used to illustrate the retake, now bowed with the hooked bowing instead:

If our “short notes” are spiccato then we might play them all in the same bow direction, in a brief “flying spiccato”:

If we don’t use the hooked/portato bowing, the retake or the flying spiccato bowing solutions then there are two possible (but not obligatory/unavoidable) negative outcomes:

The back legs of rabbits are much more powerful than their front legs. This is why their running rhythm resembles more a dotted rhythm than the regular binary flow of other animals whose front and back legs are symmetrical. Playing dotted rhythms with hooked bowings (or retakes) is a way to avoid sounding like a panicked rabbit because these bowings eliminate the possibility of unwanted “bunnyhop accents” being given to the short notes by the sudden fast bow stroke. See also the pages dedicated to hooked bowings and dotted rhythms.

We can’t rewrite a composer’s dotted (or otherwise unbalanced) rhythms, but sometimes the asymmetries we must solve are simply questions of note groupings (slurs) rather than untouchable rhythms. Changing the note groupings (slurs) is a much lighter, less aggressive intervention and often very slight changes to the slurs can make a passage suddenly balanced in terms of bowspeed. We return to the example of the Courante from Bach’s Third Suite, but now showing in the lower stave some possible bowing solutions to eliminate the discomfort of the asymmetries in the original bowings: 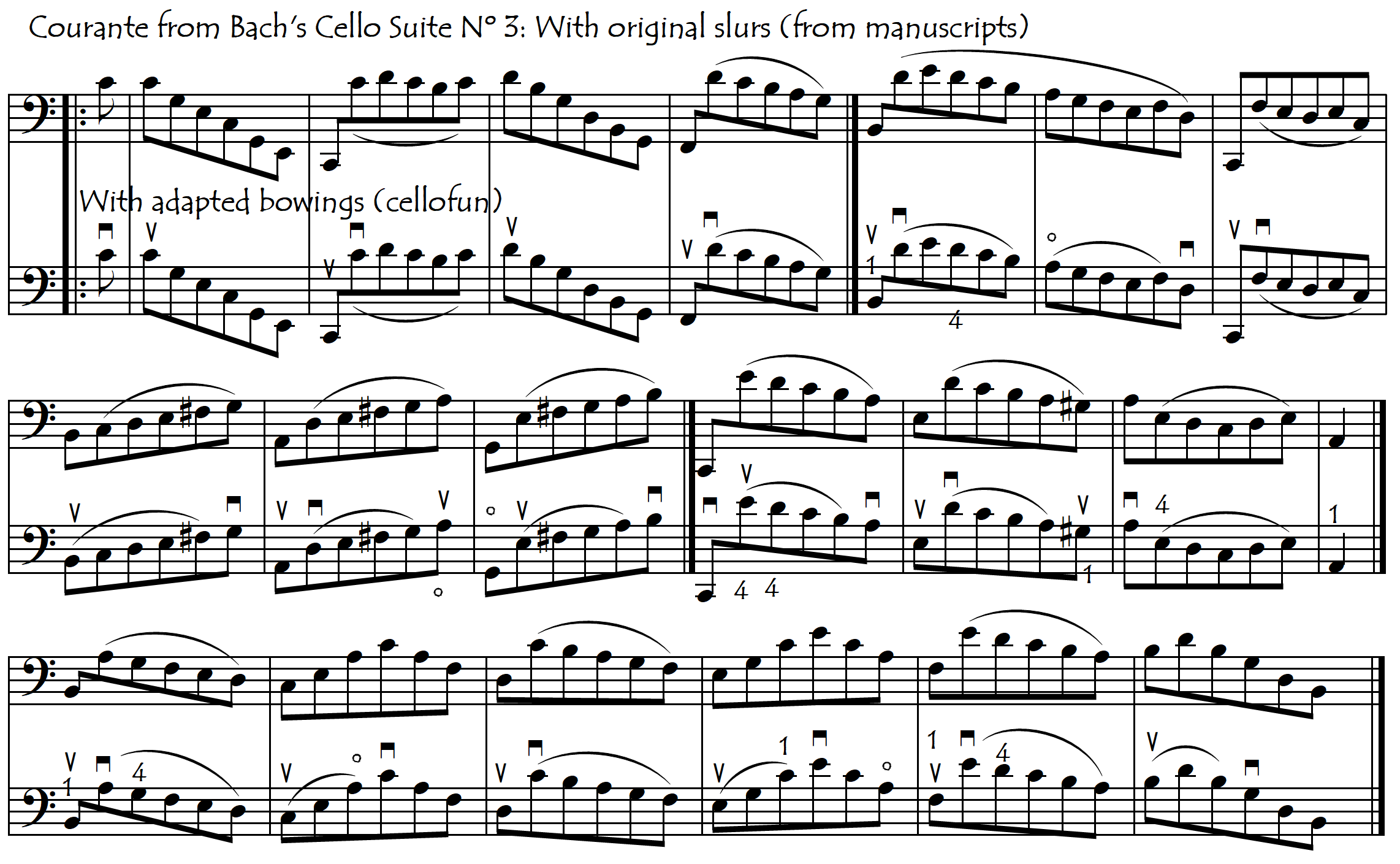 3:  SLEIGHT OF HAND: ASYMMETRICAL FIGURES THAT CAN’T BE HOOKED, FLOWN, RETAKEN OR CHANGED:

Unfortunately, not all asymmetrical figures are suitable for hooked, portato and flying bowings, retakes or rewriting. Retakes require “air-time” to get the bow back towards the frog while hooked and portato bowings require that we can relax the bow pressure (and speed?) on the long note in order to be able to “restart” the bow on the short note. But sometimes we can do neither! And sometimes, we really can’t allow ourselves the liberty to change the slurs because they form a vital element of the music, perhaps repeating throughout the piece and/or in other instruments.

In the examples shown below, even though the bow is playing dotted rhythms (as shown in the second line), the “music” is not “dotted”: the notes flow uninterruptedly. Because of this, the “hooked” bowings that can make our life so much easier when playing dotted rhythms are much less appropriate here: we just don’t have time to stop and restart the bow (nor of course to retake it). So what then can we do in the following repertoire examples to avoid the bunnyhop?

In these cases, we need to make a choice between:

Our choice will depend on our answers to the following questions:

Often the “reverse bowing”  (upbow on the beat, and short note on a down bow) is more comfortable (as in the above example). This is especially so when the short note is on the higher string (as above) because the string crossing is greatly facilitated by going in the “right” direction (see String Crossings). But even if the short notes were to be on the lower string this “reverse bowing” still has many mechanical advantages.

HALLELUJAH: WHEN “AS IT COMES” BOWINGS ARE THE SOLUTION RATHER THAN THE PROBLEM

“As it comes”, with respect to bowings, means simply alternating up and downbows with no fancy retakes, hooks or portatos. Sometimes we are lucky, and the asymmetries in a passage counterbalance each other in such a way that we can use “as it comes” bowings without the bow being inexorably pulled to a place where we don’t want it to be. In these (lucky, fortunate) cases, we can consider that the bowings “play themselves”. At the top of this page, we used the example of the Courante from Bach’s First Suite to show several passages which, in spite of great asymmetry, actually play themselves without the need for any particular action on our part. Let’s look now in more detail at some of these passages, for example:

This is like a very simple maths problem: we add up the beats going in one direction and then add up the beats going in the other direction, and then compare the two totals. For example, in the first four bars of the above example, even though the figures are all very asymmetrical, we play 7 semiquavers going out towards the tip and 5 towards the frog in each bar. This is quite balanced and the small difference is easy to compensate for with a minimal bowspeed correction, especially when, as in the above example, our need for a faster bowspeed corresponds with a crescendo and takes us towards the frog.

Bringing the bow “to where we want it” often means doing a crescendo towards the frog and a diminuendo towards the tip. In an ideal situation, bowing the asymmetrical figures “as it comes” does exactly that. If the phrase is in crescendo then we will bow it in such a way that the asymmetries take us from the tip towards the frog as in the following example from the same Bach Courante. If the phrase was to be in diminuendo, we could bow it in the opposite way:

Here are some more examples of this same phenomenon:

Here is a compilation of rhythmically asymmetrical repertoire excerpts for which neither the retake nor the hook can be used to alleviate the problems of bowdivision: