It is only in same-finger shifts that the shift distance corresponds exactly to the musical interval (see Shift Choreography).

SAME-FINGER SHIFTS AS THE ESSENTIAL FOUNDATION OF ALL SHIFTS

These are the most basic, fundamental and useful shifts. In fact, all shifts are ultimately basically “same finger shifts”. Assisted Shifts and Scale/Arpeggio-Type Shifts are just Same-Finger Shifts with the added complication that another finger is put down and/or taken off somewhere along the way, either before, during or after the shift.

The same principle applies also in Assisted Shifts, which we can practice as Same-Finger shifts on either the lower or the higher finger: 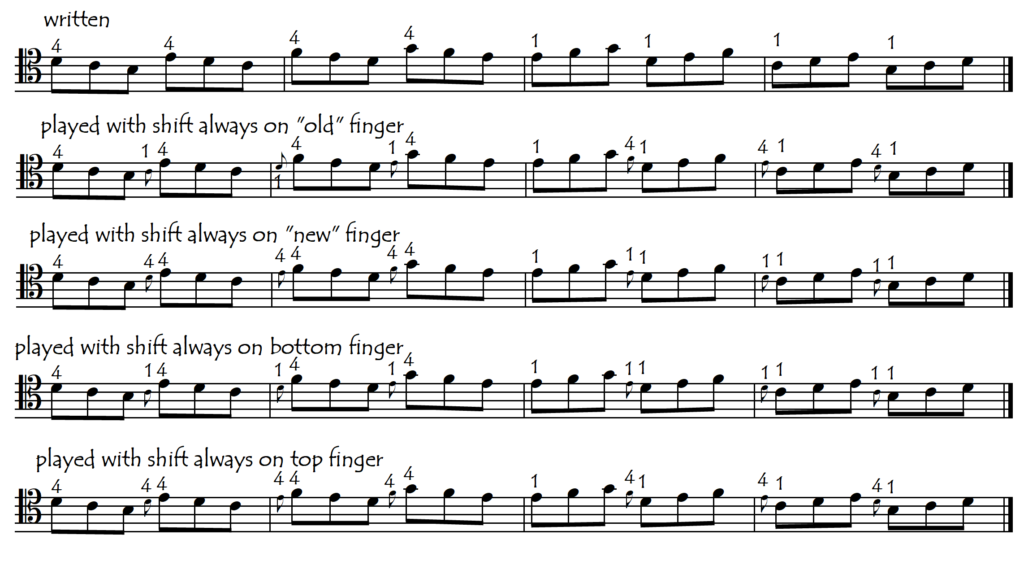 Because same-finger shifts are the basic foundation of all shifting, we need to work on them a lot. Scales using only one finger are the most basic tool for learning and improving shifting technique, but arpeggio intervals are even better than stepwise intervals for building strength because they have to resist the greater drag (friction) that is created during the longer shifts. Here are some pages of exercises working on same-finger shifts on all the different fingers (including the thumb) across all the fingerboard regions. We will start with stepwise shifts and gradually build up to larger intervals.

We might think that doublestopped shifting exercises would be even better for developing strength because the hand has to work so hard. While this is true for the hand as a whole, it is however not true for each individual finger, because in doublestopped shifts the “load” is shared between the two stopping fingers. But shifting in doublestops is a very good way to train our ear to hear and correct two notes at once. Try the following exercises to test these two ideas for yourself:

We might also think that exercises involving shifting on the extended first finger would also be good for building strength, because once again, the hand has to work so hard. For a small hand however, shifting on the extended first finger is simply so unergonomic that it is like lifting weights in an unbalanced posture. Yes, this is definitely hard work, but not only does it not actually help to create core strength but it can in fact be ergonomically dangerous (possibility of over-strain and injury). This is why none of the exercises suggested above use the extended position. Try the following exercises to test this idea for yourself: