The Arpeggione was a strange mixture of guitar, viola da gamba, and cello. It had six strings, of which the top one was a high E-string one fifth above the pitch of the cello A-string (giving it an enormous pitch range). It was tuned in fourths and thirds (giving it great left-hand ease and fluency) and had frets (almost eliminating the risk of out-of-tune playing). We have used the past tense when describing this instrument because it is basically “extinct”.

With these characteristics – which gave it enormous advantages compared to the cello – is it really surprising that Schubert was inspired to write this absolutely magical sonata for the Arpeggione, rather than writing one for the cello? The only disadvantages of the Arpeggione compared to the cello were its weak sound and its lack of expressive glissandi (because of the frets). These problems could be easily remedied nowadays. Perhaps a modern, electric, amplified, fretless Arpeggione (Yamaharpeggione?) will one day make a hugely successful comeback and relegate the cello to museum-piece status??!!

Surprisingly, Schubert wrote for the Arpeggione in the treble clef, one octave above how it really sounds. This was perhaps to avoid the frequent changes between bass, tenor and treble clef that the music would have needed if written out at its true pitch. Listen to a real Arpeggione playing the “Arpeggione Sonata” here.

Playing the Arpeggione Sonata on the cello in its original key poses exactly the same problems of register as playing other violin music on the cello in the original key, with the exception that here we do need to use our C-string. So it is quite surprising that, while we play the Arpeggione sonata on the cello as though it was the most natural thing in the world, the idea of playing classical violin repertoire on the cello, in the original key, appears very strange. Perhaps it is the Areggione’s playing posture (the same as the cello), and the use of a low (E) string (which makes the sonata unplayable on the violin) that leads us to consider this work as more of a cello piece than works from the violin literature? Played on a 5-string violin (with an extra lower string) this sonata would be magnificent.

TRANSPOSING THIS SONATA DOWN TO MAKE IT MORE PLAYABLE

This is such a beautiful, inspired, transparent, masterpiece that it is doubly painful – unbearable even – to play it badly. Like Mozart’s music, it absolutely needs to sound totally easy, natural, and relaxed. It should be an absolute delight to play this piece, but trying to achieve this state while playing this sonata on a 4-string cello is a very difficult job. It’s a bit like asking a bear to dance Swan Lake, a bass to sing a coloratura soprano aria, a trombone to play a trumpet concerto, etc. We are completely out of our comfort zone. To get it into our comfort zone we basically have three choices: practice like mad, play it on a 5-string cello …….. or transpose it down a bit. Playing it on a 5-string cello is definitely the best choice, but seeing as most of us don’t have one of those, the most practical solution is to transpose it down. Now the question is, by how much? Let’s explore this question:

Violists aren’t stupid: they don’t like to suffer or to make their audience suffer. Even though the viola is tuned an octave higher than the cello, violists play this sonata at exactly the same pitch as cellists. This means that:

Playing this sonata in the equivalent register as violists – one octave lower than what we normally do – would make it infinitely easier. But unfortunately this is not a valid musical option because, apart from the damage done by the obligatory modifications to keep it in range (the same as for the viola version), in this low register it would sound like an elephant trying to do acrobatics. A good compromise between the two extremes (of playing it either at pitch or down an octave) is to transpose the sonata down a fifth. This brings it into a more comfortable register but doesn’t take us so low that we sound like a hippopotamus, and it reduces enormously the modifications necessary to keep it in range.

Of course, when we transpose this piece down by a fifth, all those notes that lie beneath the pitch of “G” (open G string) in the original Arpeggione version now lie beneath the pitch of our open “C” string. We need therefore to modify the music in the passages that use these “out-of-register” notes, in order to bring them into the cello’s playable register. Fortunately, there are only 17 of these notes, with only 7 passages concerned in the entire sonata (compare that to the 110 notes and 20 passages for the viola version), and the modifications required to substitute them (shown below) are relatively minor, and certainly insignificant in comparison to the major changes that viola players are required to make to the viola part in order to play this piece in their low register.

Exactly the same transposition (down a fifth) has been used for Bach’s Sixth Solo Suite – also written originally for a cello with an additional high E-string. As with that Bach Suite, transposing down a fifth, rather than a fourth or a third, has the advantage of conserving the use of the open strings and harmonics, which help us so much to play with ease and fluidity. The following link leads us to a more detailed discussion on the merits of the transposition downwards of these 5-string cello pieces

In the examples shown below, the left side shows the literal transposition down a fifth of the arpeggione part, while on the right side are the modified versions for cello as used in the cello versions offered on this page. Several possible solutions exist for some of these passages. The solutions offered are just some of the possibilities. 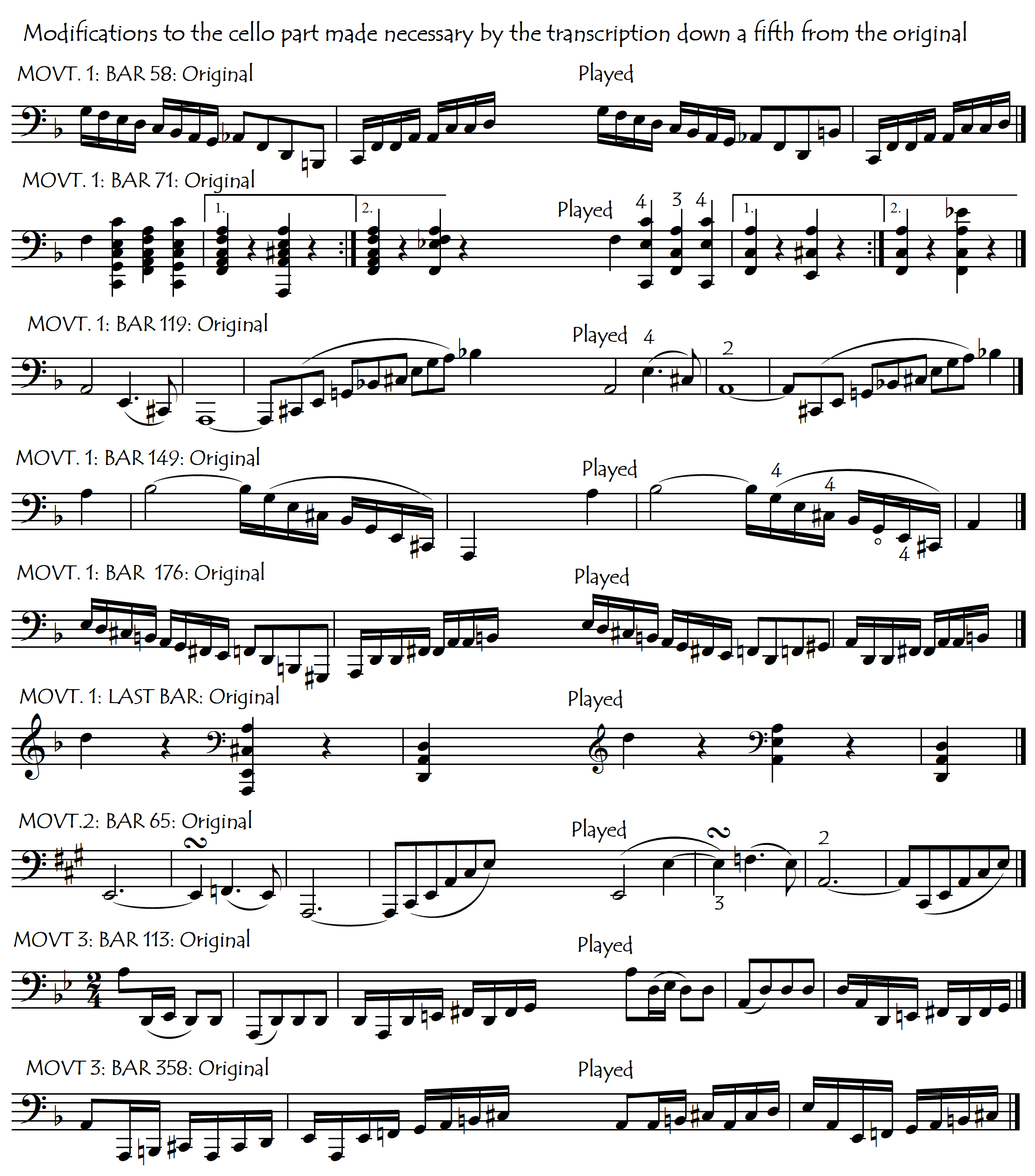 While the cello part is vastly facilitated by this transposition down a fifth, it poses some problems for the piano accompaniment. We basically have a choice between either transposing the accompaniment down a fifth, or taking it up a fourth. Transposing it down by a fifth risks bringing the low passages into the boomy elephant register, whereas taking it up a fourth risks making the high passages sound tinny. In theory, we could decide according to the characteristics of each phrase whether to go either up or down at different moments in the piece. We could even treat the two piano-hands differently at the same musical moment sometimes. So what do we do?

Fortunately, this problem is not as bad as it could be, because the original piano part so often uses the low registers of the piano (probably to balance the high register of the Arpeggione writing). This means that the option of raising the entire piano part by a fourth is almost always a much more successful option than lowering it by a fifth. This raising of the piano part seems to compensate perfectly for the fact that the cello has gone down by a fifth.  It is as though globally nothing has changed, simply that the two instruments have both come closer to their middle register and to each other.

There are however a few passages in the transposed piano part offered here for which we have made some more complex changes, to bring down some of the high register passages in the right hand. In these passages, we have either taken the right hand down a fifth (rather than up a fourth), or, for some passages in octaves we have taken it up a fourth but eliminated the higher voice. The main passage affected by these changes is the piano’s opening to the sonata. Played up a fourth, the right hand just sounds too high, so we have taken that hand down an octave. But the left hand would be too low if we took it down a fifth (instead of up a fourth) so we have needed to revoice the two hands in order to avoid them crossing each other:

COMMENTARIES ABOUT THE SHEET MUSIC

The source for the “Literal Transcription” offered here is Schubert’s autograph manuscript which we have simply copied out one fifth lower, with all the original notes, articulations, dynamics etc. A comparison of the Henle Urtext edition with this manuscript is made on the page discussing the merits of Urtext editions. Schubert uses very frequently the “accent” symbol in his manuscript, however, in his hand-written notation, this symbol is often very ambiguous because it resembles so much the diminuendo hairpin. Taking into account the gentle, lyrical nature of this sonata, we could probably interpret these accent symbols more as expressive highlights (or rapid diminuendos) than as dramatic “Beethoven-style” accents.

Whereas the “Literal Transcription” is our Urtext version, the “Edited”, “Clean” and “Easier” versions offered here are “playing” versions, in which certain passages have been have been moved into different octaves, in addition to the transposition down a fifth. The “Easier Versions” have had the highest passages lowered but still use the Intermediate Region quite frequently along with some occasional but easy thumb position.

The following register changes have been made to the “Concert Version” cello parts (in addition to the transposition down a fifth). Bars 161-164 and 179 have been taken down an octave. In bars 182-188 the octaves have been inverted to avoid going down into the cello’s low register.

Two play-along audios of the accompaniment can be found here below. The first is “played” on a guitar and the second on a piano. If we actually download them then we can play them at different base tempi with the wonderfully useful and simple Amazing Slowdowner program. Attention: playing Schubert without rubato is almost a crime against humanity so both of these accompaniment tracks have a lot of rubatos. This will take some getting used to and it is probably a good idea to first sing the cello part with the accompaniment, while reading the piano score, rather than trying to play it directly on the cello.

Although these movements are connected, the slow movement can be played on its own as a “stand-alone” piece.

Register changes: Movt. II: bars 35-46 have been raised up an octave (i.e. raised a fourth rather than being lowered a fifth).  Movt III: bars 69-75 (and the identical passage in bars 205-211) have been raised up an octave for melodic variety, bars 113-114 and 135-136 the same, and finally, in bars 308-319 the low pizz of the arpeggione gives on the first quaver of each bar has been eliminated from the cello version when it is doubled by the piano.

Note changes: apart from the necessary changes to accommodate notes that are out of range (shown above), the only other note changes are in bar 250 of movt III, where the last three notes have been rewritten for melodic variety.