This magnificent three-movement sonata (often called “Sonatina”) lies mostly quite well for cello in the original key which means we can use the piano accompaniment part from any violin edition. None of Schubert‘s notes have been changed in the “Performance Versions” apart from the revoicing of a few chords, however quite a few passages lie a little above our comfort zone. In the Easier Versions these high passages have been systematically taken down an octave to keep the left hand in the Neck Region. The audio playalong piano accompaniments found here are from the website www.piano-accompaniments.com. These accompaniments are also available in slower “practice” tempi but need to be purchased from that website in order to be able to be downloaded.

The double stops in bars 78-82 and 163-166 have been revoiced for better projection (the lower notes have been raised up an octave to get them out of the “hippopotamus register”).

In the Urtext version, Schubert uses repeat signs for bars 31-38 and 47-56. Even though the notes of these two passages are effectively identically repeated, we can play the repetitions as echos, with totally  different fingerings and bowings. This is why these repetitions have been written out in our Performance (and Easier) Versions.

The cello (and violin) part in bars 77-81 (and in the parallel passage bars 171-175) in non-urtext editions is very different to the Urtext version. This difference can be considered an improvement. For the piano part, unlike for the string part, the difference does not concern the notes but rather only concerns the presence (or not) of ties. If our accompanist is playing with an Urtext edition we may want to change the piano articulation in these bars, tying each long note to the note that follows it. 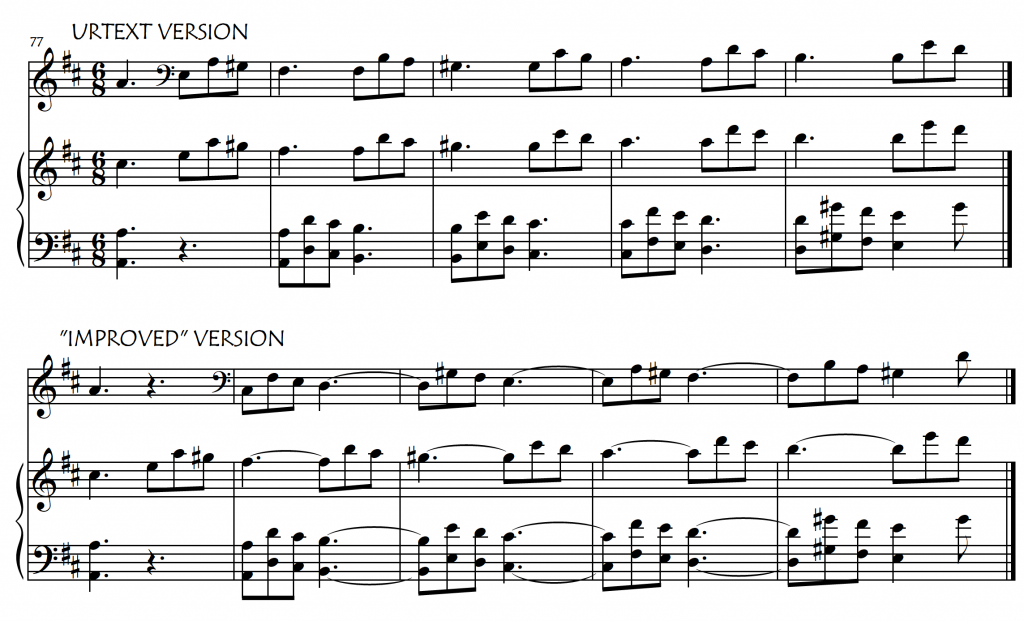 This is a difficult movement, and many of its difficulties (string crossings, virtuosic fast passages and awkward extensions) have nothing to do with its high register. Therefore, for the “Easier Version” of this movement, not only have the high passages been transposed down an octave, but also we have changed many notes, and even some rhythms in lower passages to make the movement playable and enjoyable for all cellists.