Haydn and the Cello

The following link opens up a compilation of all the thumbposition passages from Franz Joseph Haydn’s (1732-1809) two concertos (C major and D major) as well as from his Sinfonia Concertante:

Is it possible that Haydn intended some of his soloistic higher register cello compositions (D major Cello Concerto, Sinfonia Concertante etc) to be played on a 5-string instrument in the same way that he possibly wrote the high solo cello parts of his early symphonies for a 5-string cello? Bach and Vivaldi had also previously done the same. The writing in these pieces is so much higher and more virtuosic than his standard cello writing (including that of his C major cello concerto) that we can justifiably wonder if perhaps the cellist for whom Haydn wrote them had an additional high E-string on their instrument. If we play these very difficult pieces on a 5-string instrument, suddenly they become infinitely easier. Now we no longer need to be “Paganinis-of-the-cello” to play them well. Click on the highlighted links below to see all the thumb position passages of these two pieces written out down a fifth. This is how they would be if we played them on a five-string cello.

Sinfonia Concertante [high passages] (written out down a fifth)

This concerto, being standard first round orchestral audition material, is the curse of many aspiring professional cellists’ lives. But most audition first rounds are now played behind a screen, so what is to stop us playing it on a 5-string cello, especially if that is the “authentic” way ? Well, to start with, we would be disqualified for cheating, and secondly the piece would now be so much easier that it wouldn’t be asked for in auditions. But let’s look in more detail at other more realistic consequences of playing it with 5 strings.

While the Sinfonia Concertante seems to lend itself very well to being played on a 5-stringer, the exciting idea that doing the same with the D-major concerto might actually be “authentic” is given a cold shower by the following two passages in the first movement, shown here as they are played on a 4-string cello with the tenths fingered across neighbouring strings, and how they would be played on a 5-string cello with the tenth jumping across two strings:

It is hard to imagine these tenths being played by leaping across three strings: this would sound like Prokovieff, Bartok, or maybe Vivaldi, but would definitely not sound like classical “Papa” Haydn. So, assuming therefore that these tenths must be played on neighbouring strings, then the intervals are so physically large in the lower region of the “A” and “E” strings that they would be impossible to play on those two strings. Therefore they would have to be played in the higher reaches of the fingerboard on the “D” and “A” strings. All this means that the extra fifth string would be of no help at all in these passages, and implies (but doesn’t prove) that the cellist for whom it was written was a virtuoso, for whom running up and down the fingerboard between earth and stratosphere was probably not a problem. If Haydn’s cellist could play these two passages, then they could quite probably play the rest of the concerto on a four-string cello also.

Haydn’s D-major concerto is a strange one indeed. Written in 1783, it just seems both too romantic, and too virtuosic to fit in with Haydn’s other compositions. From a cello-technique point of view, this concerto is just so much more virtuosic than anything that comes before it, especially by Haydn but even by other “cellist-composers”. In fact, in many ways this concerto is our cellistic equivalent of the Beethoven Violin Concerto, which was written 23 years later. Both are full of scales, arpeggios, and a huge variety of their rhythmic and melodic permutations.

If the original manuscript had been lost, then we would probably assume this concerto to be a reworking, by a later virtuoso cellist, of a simpler “original” Haydn concerto (or a totally original work not by Haydn at all). But because the autograph manuscript exists, we can only assume that the collaboration with the cellist for whom it was written (Kraft) was so close, that the resulting concerto is ultimately almost a pastiche of the two influences: on the one side a classical Haydn, and on the other side a virtuoso cellist who was far ahead of his time both stylistically and technically (or was playing a 5-string-cello).

The urtext score of this concerto raises many problems typical to urtext of which the most significant is: what do we do about the “obvious” note errors? Every player will need to decide whether to trust their own common sense, ears and musical taste, or whether to just do what the score says (see “Freedom or Obedience” and “Fascism in Music“). If we are willing to be brave, not only can we correct the several apparently erroneous notes: we can even add a few new ones (to “improve” the piece), and remove some others (to make it more playable).

Here are two suggestions for note additions, in two little cadenza-type interventions. The first suggestion is simply more fun and less predictable than the original. The second suggestion is also more fun, but is especially interesting in that avoids a deathly silence (for both orchestra and soloist) in what should be a culminating firework explosion of soloistic sparkling virtuosity. They have been notated here in double-time for easier reading and tempo choice:

Here below are some more suggestions, this time however mainly for “note-removal” to make the concert more playable. “Note-removal” sounds quite radical, but in fact we are only suggesting the removal of the lower octave notes in several passages of fast difficult octaves in the last movement. Also, in each return of the 16th-note passage, we have converted the D natural always to a D# in order to avoid suddenly having to play a whole tone between the 2nd and 3rd fingers. 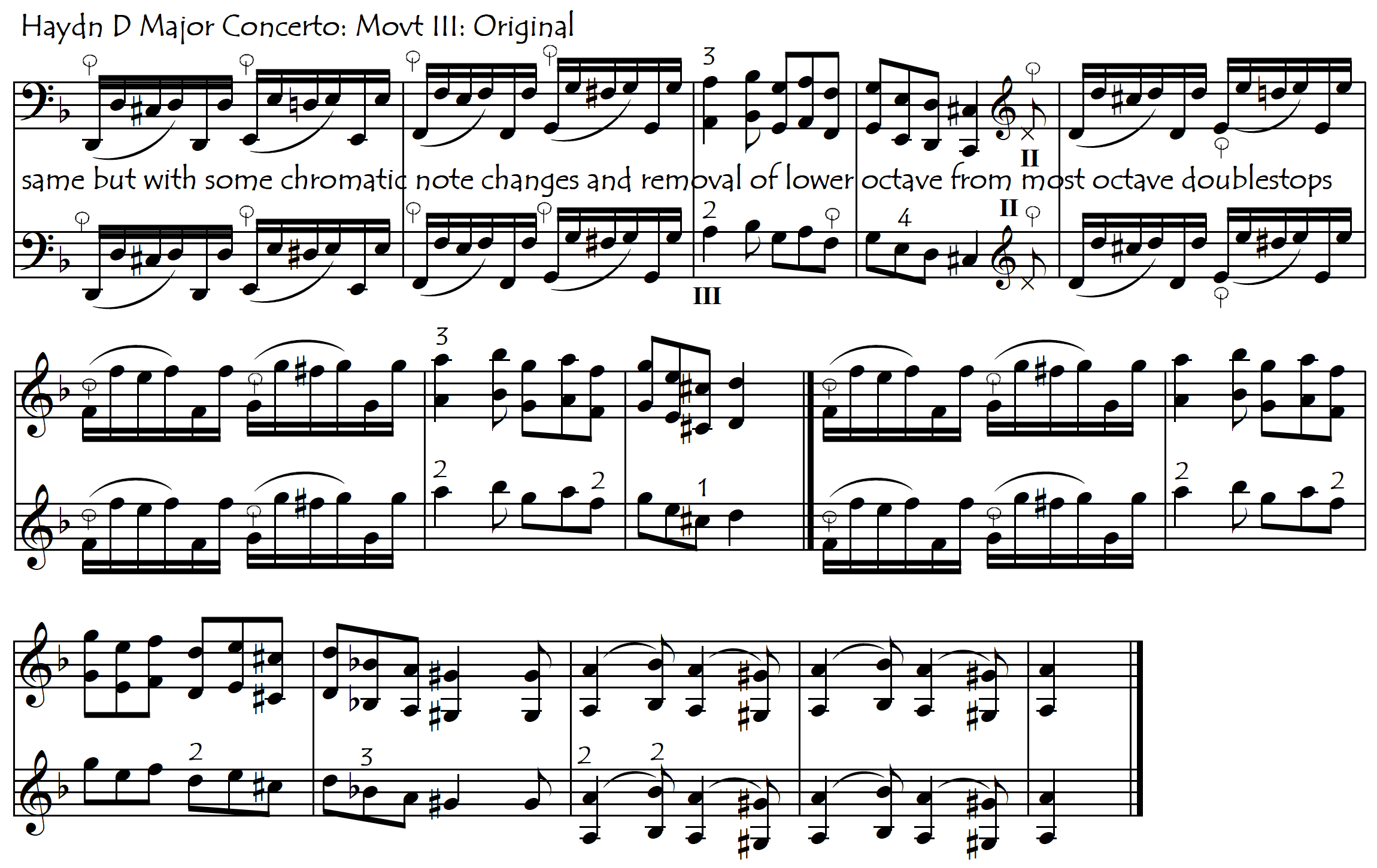 Removing the lower notes of the most difficult octave-passages is a fairly non-invasive (composer-respectful) and audience-friendly way of improving the playability of a piece. The same modification can be used to greatly help us in Tchaikovsky’s Rococo Variations and the Dvorak Concerto as well as in other virtuoso pieces (see Octave Removal Experts).

In Haydn’s C-major concerto, we wouldn’t dream of modifying, adding or removing even one single note. There is just no need: the concerto is perfect as it is. We could look on the above-suggested modifications to the D-major concerto as being improvements to the contribution of Kraft rather than to that of Haydn! The slow movement of Haydn’s Symphony Nº 13 has many similarities with the slow movement of this concerto.