Paganini: Variations On The “Moses” Theme By Rossini

The original title for this piece uses the term “Variazioni di Bravura”, which sums up very well its spectacular, extroverted, and brilliant character.

In the same way that we might consider  Saint Saens’ “Introduction and Rondo Capriccioso” to be the ultimate manifestation of “frenchness” in music, these “Moses” variations by Paganini (on a theme by Rossini) could be considered to be the equivalent for italian style. Starting with the most beautiful bel-canto operatic melody the subsequent variations waste no time in becoming playful and theatrical in a charming, light-hearted, operatic (opera buffa) quintessentially “Italian” way. The mixture of Rossini and Paganini is a delightful recipe indeed and the ending is a real show-stopper, perfectly designed to bring an audience, roaring, to their feet – well, perhaps in the days before the Internet and non-stop entertainment ……..

Originally written by Paganini in 1818, the version that cellists play normally is the very fine arrangement by Maurice Gendron, in which Paganini’s idea of playing the whole piece on one string is maintained, but in which the original skeletal ultra-simple accompaniment is significantly elaborated, thickened and romanticized. This cellofun version is a “third-generation” transcription because it uses both Gendron and Paganini as sources, taking the best of each (hopefully). It adopts Gendron’s treatment of the opening theme (not as high and not as often repeated as in Paganini’s original version) but in the second variation, we have chosen to use Paganini’s repeats (of both sections) rather than Gendron’s repeat of only the first section. In the last variation, we do exactly the opposite, repeating (like Gendron) only the first section rather than doing Paganini’s repeat of both the first and second sections (bars 9-22).

Cellistically, the cellofun version is somewhat easier than Gendron’s. Many of the artificial harmonic passages are rewritten (some of the faster ones are played as stopped notes, others are played “on the fifth” and others are played one octave lower and perhaps sul ponticello). In the Edited Version, the idea of playing it entirely on one string is not always observed: there is one passage in each variation in which we make use of the D string in order to avoid technical struggles and the risk of bad intonation. We do this because the music is just too beautiful and spectacular to risk messing it up by the self-imposed difficulty of playing it all on one string, a circus trick of which most listeners would not even be aware. Even on the violin, it is difficult to play the entire piece on only one string, but on the cello, there are some passages that are all but impossible except for the most virtuosic cellists.

To make the piece even more playable, we can simplify some of the more complex bowings if we want to. Notably, Paganini’s original “crazy” asymmetric cross-rhythm bowing of the last variation (the top line of the following example) can be replaced by simple, totally non-crazy separate bows or, as an intermediate difficulty level, with the notes slurred in groups of three (see Fast and Tricky: Coordination Problems). 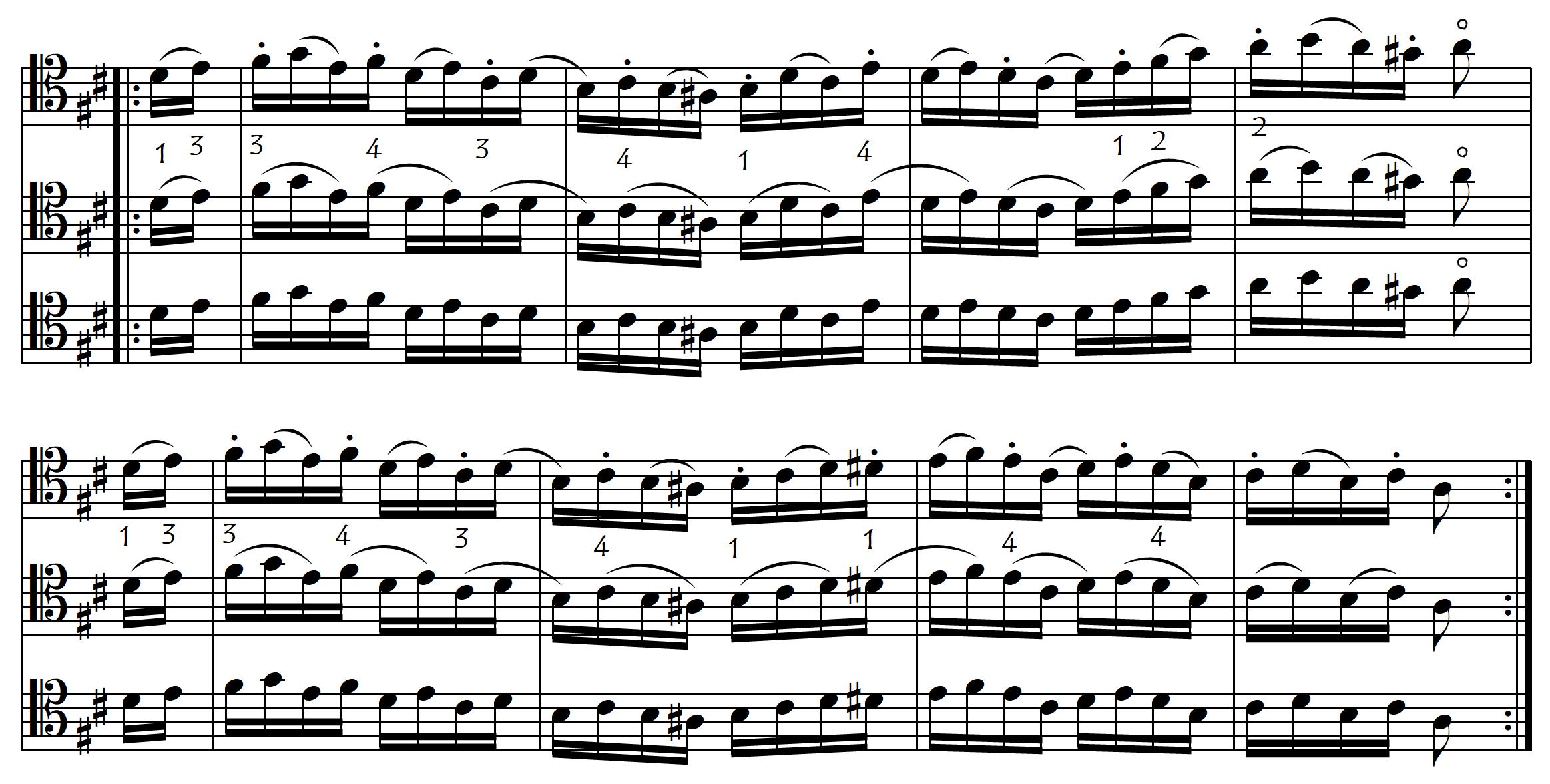 The “Easier Version” is very often one octave lower, and in some of the most complex passages not only have the bowings and articulations been simplified but also, sometimes, the notes.

The cellofun piano part offered here mostly uses Paganini’s simple, transparent piano accompaniment but often the bass line has been doubled at the lower octave (unlike in Paganini’s version). Also, in the “Maggiore” section of the introduction, we have added some of Gendron’s romantic thickening into the right-hand arpeggios. The cellofun cello parts can be used/played also with the Gendron piano accompaniment, but be aware that his piano part is seriously modified, romanticized, and (curiously) missing a lovely four-bar piano transition leading into the last variation, which is included in the cellofun versions. Also, his piano part is missing the repeat of the first section of Variation II.

Below you will find two prerecorded accompaniments for this piece. The first one uses faster “performance” speeds while the second is at slower “practice” (or Easier Version) speeds. The frequent changes of tempo, as well as the ad-lib cadenza passages, make the preparation and use of this play-along accompaniment quite complicated. For this reason, there is a special cello part for use when playing with this accompaniment, in which piano cues and introductions are indicated so that we can always know where we are, when to start, and what tempo to take. During the longer, free, ad-lib cadenza passages, arrows in the cello part indicate piano chords that come during our long, held notes (those with fermata signs over them). These piano chords let us know that we can continue, and serve as waypoints (references) so that we can always stay with the accompaniment.

When playing with a real, live pianist, each variation flows into the next but when playing with the pre-recorded accompaniment we need a little piano introduction to set the tempo before each new variation.