Passages in octaves are a regular occurrence in virtuoso cello pieces (including concertos) but are quite rare in the rest of the cello repertoire. This is probably because composers soon realised (heard) that passages in octaves for the cello, unlike for the piano and violin, had every chance of being played out of tune. If doublestops in general make one cellist sound like two bad ones, then nowhere is this more true than in octave passages. We are definitely not used to shifting this much on the thumb. It’s a shame that Beethoven didn’t realise this when writing both his first Sonata and his “Triple Concerto”! These passages would be effortless on the piano, but on the cello, they take us into the uncomfortable world of virtuosic tightrope dancing!

Practicing octaves can however be very useful for getting comfortable in thumbposition because:

All this means that, as well as being good for our thumb-shifting control, octaves are great for developing strength and a tough thumb callous …… so long as we don’t overdo it!

WHY DO COMPOSERS USE OCTAVES?

A passage in octaves is slightly richer in sound and depth because the notes are doubled, but apart from that, the actual music is identical. Doubling a passage in octaves is a bit like putting a blindfold on a tightrope walker and making them walk backwards: the basic task (the basic music) is the same, but now it’s made much more difficult, dangerous and therefore spectacular. This is a virtuoso technique, used mainly in concertos and virtuoso showpieces, almost exclusively from the Romantic Period and later. Even Boccherini (1743-1805) – the king of thumbposition (and of doublestops in thumbposition) in the Classical Period –  almost never wrote passages in octaves. In fact the frequent use of octaves in the third movement of Haydn’s D Major concerto (1783) is so unusual and “out of style” that it could be interpreted as an indication that all is not quite as it seems as far as the composition of this work is concerned, in spite of the discovery of an original manuscript in 1951. If Haydn really wrote those octaves, it might have been at the request of the cellist for whom he wrote the concerto (Anton Kraft), because in no other piece did he write octaves for the cello, and these ones are extremely virtuosic (difficult).

Why are octaves like a high-performance sports car? Because they are definitely rear-wheel-drive beasts. But not only is the thumb the motor, it is also the steering, which actually makes octaves more like speedboats than sportscars. In octaves, the thumb is supremely important in every way: it is much easier both to find and to adjust the intonation of the higher octave from the lower note (thumb) than the reverse, and it is much easier to measure our shifts on the thumb rather than on the higher finger. Unfortunately, when hearing and playing doublestops, our ear tends to focus instinctively on the higher note of the pair which means that this thumb supremacy, rear-wheel drive and steering is somewhat counterintuitive. For all the above reasons, we absolutely need to focus on the thumb (rather than on the higher finger) in our octaves practice. One way to do this is to sound the thumb on its own: in other words, we will play our octave passages with the lefthand stopping both strings, but we will not sound the top string with the righthand (arco or pizzicato). We can call this practice technique “octave breaking”.

Practicing our octave passages as broken octaves helps us to better control them as hearing the shifts on only one string is a lot easier for the brain than hearing a simultaneous glissando on two strings. Breaking the octaves also allows us to hear each double-stopped note individually (not just the shifts) which makes it easier to correct their intonation. We can break our octaves both ways: most importantly to hear the thumb shift alone, but also to hear the top finger shift alone.

Next, we incorporate the doublestop, still keeping however the shift on only one string. We could call these now “half-broken” octaves:

In the above examples, we broke the octaves in order to reduce the amount of aural feedback (glissando now on only one string instead of two). Sometimes however we need to do exactly the reverse: glueing together a passage in broken octaves in order to give us some aural feedback (glissando) where previously there was none. This occurs in passages in broken octaves in which the octave is broken in such a way that finding an audible shift glissando to guide our shifts is counterintuitive

Here, our left-hand simply plays in octave doublestops while the bow plays on only one string at a time (see Broken Doublestops) so we could practice both of these examples as the identical simple doublestopped octaves:

As a general rule, in any passage in octaves, broken or otherwise, the key to successfully mastering it will be to always find a way to practice it in which we make the shifts clearly audible. This process is made easier if we initially limit our audible glissando to only one of the two strings. There are various ways to do this. In broken octaves for which we have a string change coinciding with the shift, we will need to add either an extra single note or a doublestop to each position. Making the shift on the thumb audible will almost certainly be more helpful than making the higher-finger shift audible because the thumb is not only our motor and steering wheel in octaves but is also our weakest technical link and hence the most likely component of an octave to be out of tune: 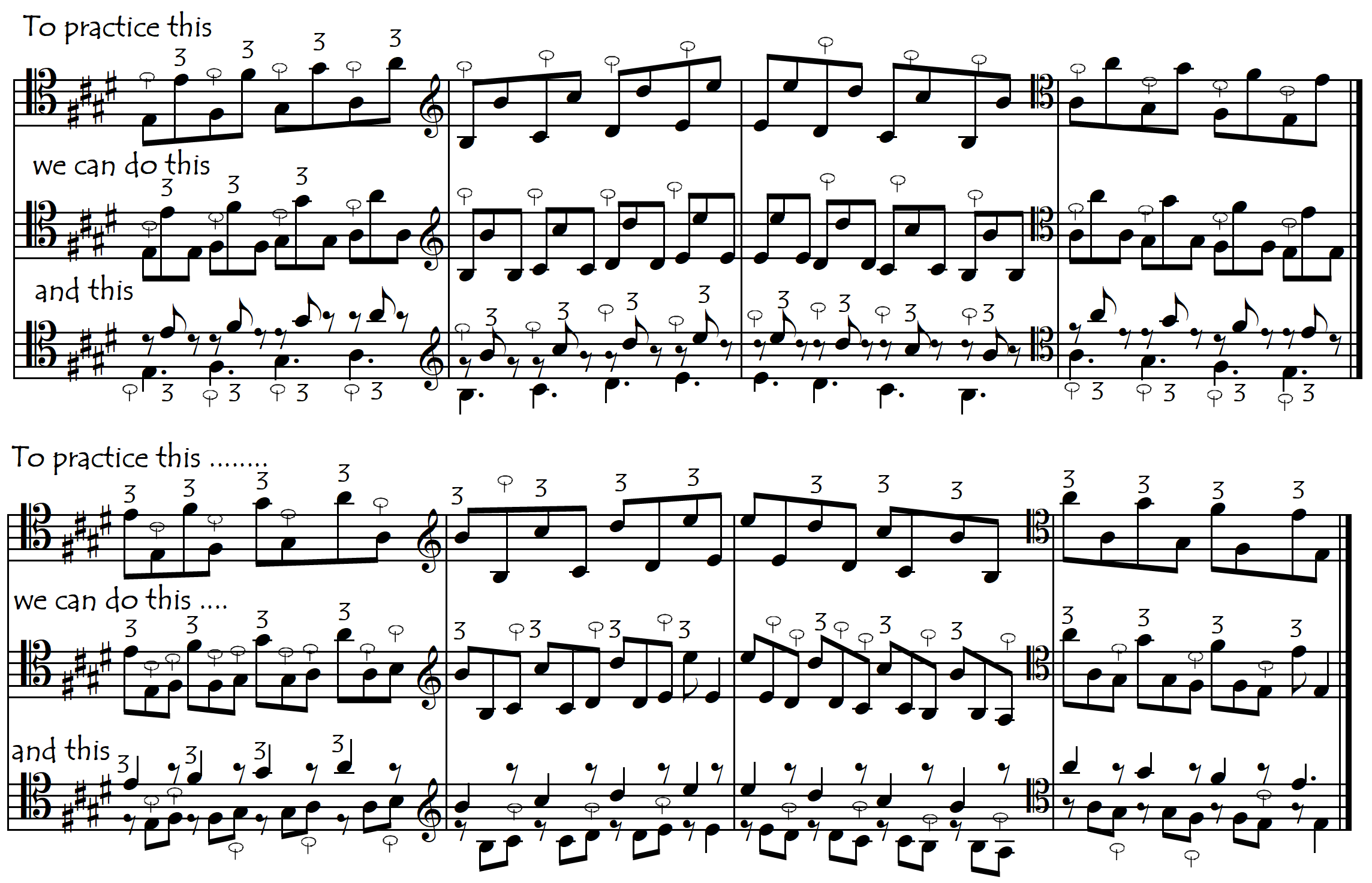 In all these above examples we put the audible shift on the thumb. In the following examples we put the audible shift now on the higher finger (higher string) of the octave. This is also useful and reinforces our octave shifting tuning, but is perhaps not as useful as when we practice our octaves (and broken octaves) with the thumb shifts being the principal auditory feedback:

Techniques and Tricks For Practicing Octaves

OTHER WAYS TO PRACTICE OCTAVES

Almost any melodic material can be played in octaves and thus serve as valid octave practice material. For example, watch here Danil Shafran on YouTube playing Schubert’s Ave Maria (in octaves at certain points). One of the simplest ways to get used to playing octaves is just to slide (slither) all around the fingerboard in a constantly-moving improvisational glissando, in octaves. We can stop every now and again to correct our intonation whenever we get hopelessly lost, but in general, this exercise gets our ears used to hearing and correcting the intonation spontaneously, and also accustoms our hand frame to adjust its spacing automatically to whichever part of the fingerboard it finds itself in.

A professional cellist wanting to play concertos to a paying public has no choice but to play everything that is written. But for an everyday human who also plays the cello and who would love to play some of these wonderful pieces, why not permit ourselves the luxury sometimes of taking away the worst octaves, thus making some very difficult passages much much easier to play well, while not really “changing” the music at all ? To play some of the faster repertoire octave passages in tune requires sooooo much (extra) practice. Even amazingly good cellists can sound bad for these few brief moments if they are not in top form. Why suffer? Is it really worth it? Instead of suddenly sounding (and feeling) awful for a few bars of Tchaikovsky’s Rococo Variations, Dvorak’s concerto or Haydn’s D Major concerto, we can sound great by simply doing a bit of “deoctavising” (disoctavation?) which usually will mean the removal of the lower notes of the octave. The change to the music that this modification causes is so slight that probably nobody (except perhaps other cellists) will even notice. But everybody will appreciate the improvement if we suddenly are able to play the passage reliably and comfortably in tune! 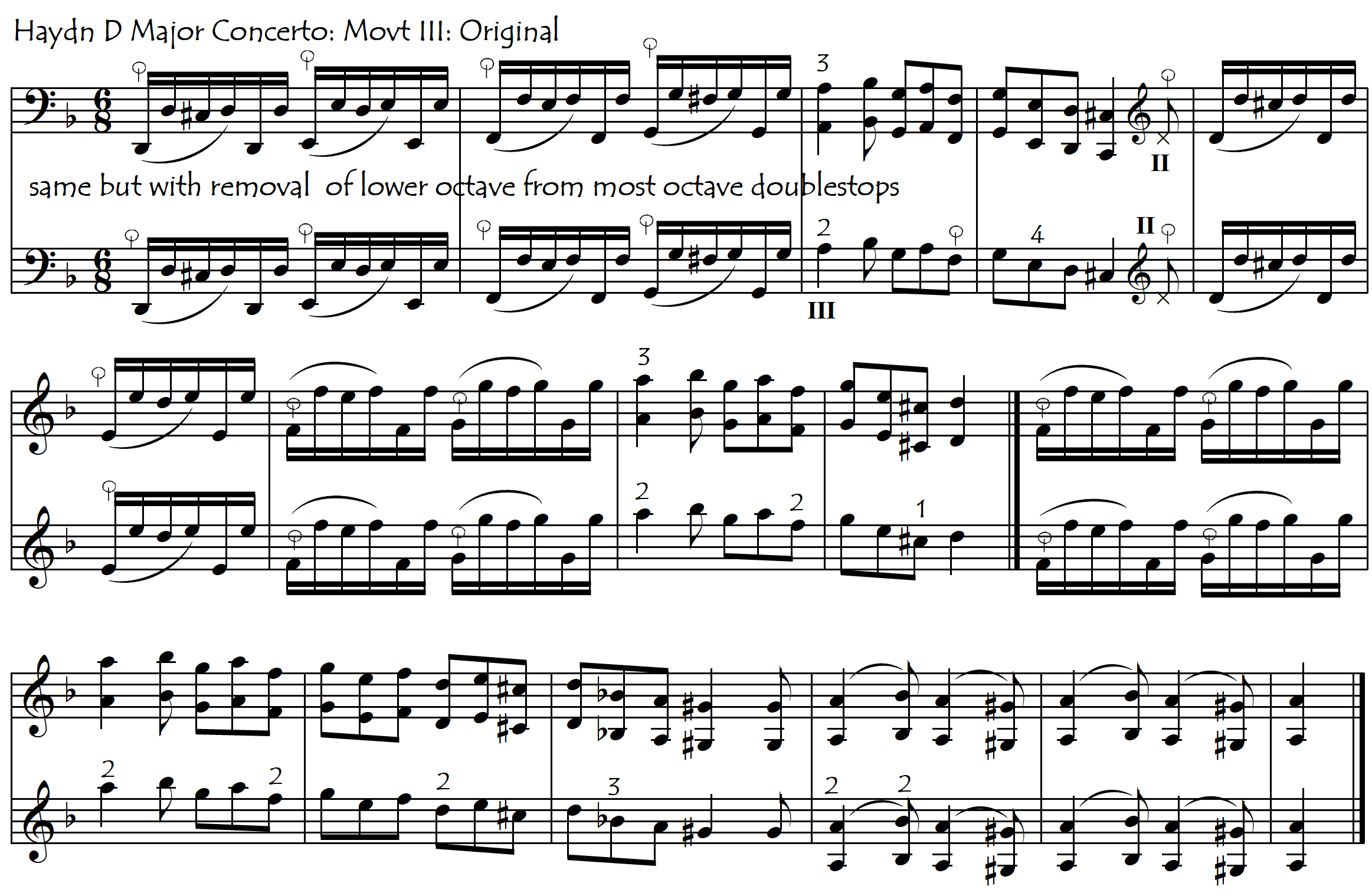 Here are some more repertoire examples for which we can use this (intellectual) technique:

Sometimes we can compensate for the removal of the lower note of the octave by adding some other type of “ornamentation”.

In orchestral music there is absolutely no reason for a composer to write doublestopped octaves, but quite often pianist-composers (which means almost all composers) will take a keyboard line in broken octaves and simply give it to the cello section. If the passage is non-legato then we can often finger the octaves across three strings and just jump with the bow which is not normally a problem.

But when the line is legato this can cause us big problems: either we sacrifice the legato line (by jumping across the strings with the bow) or we sacrifice the intonation security (by playing the octaves with the perfect fourth interval to the neighbouring string). One way to achieve both legato and 100% intonation security is by playing the passage divisi:

“Deoctavised” Passages From The Cello Repertoire