THE DIFFERENCE BETWEEN SYNCOPATIONS AND OFFBEATS

In syncopations, we don’t just play off the beat but also play over the beat in the sense that we tie our notes over the beats. Because of this, it is a good idea to work on our “offbeat” playing as a preliminary to working on syncopations. Simple metronomic exercises to establish the mathematical correctness of our offbeat and syncopated rhythms are a very dry (but efficient) first stage in getting familiar and comfortable with these types of rhythms. In the following exercise progression, the rhythms gradually “tighten” as we need to subdivide into increasingly smaller fractions (first two, then three then four).

Put the metronome on any pulse. This little series uses four beats to a bar but we could also do the same with three beats per bar. Play the progression first quite slowly, then gradually make the pulse faster. The difference between the simple offbeats and the syncopations is that in the syncopations, instead of playing short notes between the beats, now we will hold these notes until the next offbeat impulse:

For a very pleasant next stage in acquiring fluidity and comfort in our syncopations, we could play music from the “popular” genres such as Ragtime and Pop. In this music, syncopations are normally much more common than in most “Classical” pieces and syncopated rhythms are often more common than four-square on-the beat rhythms.

It might help to start with the “square” versions of a piece before moving on to progressively more syncopated versions. The following examples illustrate this progression with some songs by The Beatles: 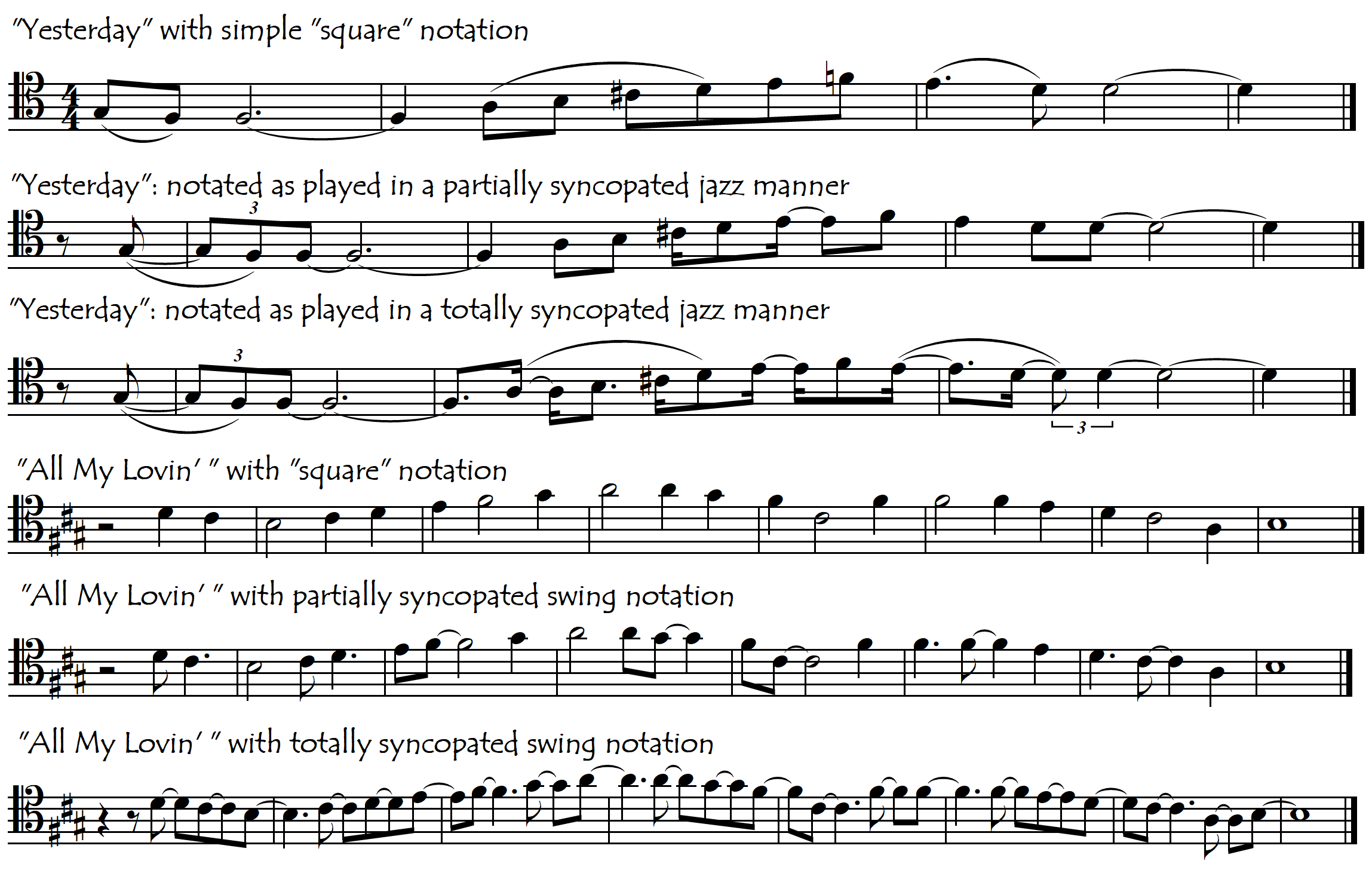 Jazz and Bossa Nova regularly take syncopation to another, higher, level of complexity and syncopated notes may here be even more frequent than notes that actually fall on the beats. Here is another musical example, this time taken from the jazz standard “Body and Soul” (1930) by Johnny Green.

See also “Fast Playing: The Importance of the Beat”

Syncopations are the ultimate laid-back “antifascist” rhythms. Playing between the beats (rather than on the beats) is equivalent to writing between the lines. Syncopation is the opposite of “toeing the line”, of military discipline and clarity. It gives, on the contrary, a beautiful, relaxed, cool, flowing expressivity and sentimental freedom to the music. How many military marches use syncopations ? None that I can think of. Imagine soldiers trying to march to war to the music of Bossa Nova, Jazz, Pop, Disco, The Beatles etc. Instead of striding forth with perfect order, discipline and determination, the soldiers would inevitably loosen up, dance, lose their aggressivity and end up having a picnic with the opposing forces!!! It’s not surprising that most “philosophical” music (music that searches for a deeper, more intimate humanity) such as Jazz, the Beatles, Schumann and other “Intimate Romantics”, Bossa Nova and even most Pop music, is full of syncopations.

And let’s not forget that we owe all this 20th-century syncopation -with all the joy and loosening-up that it brings – to the Afro-American influence. Scott Joplin, with his invention of Ragtime – a sort of fusion of African rhythms with classical harmony – planted the seed that would later develop into Big Band, Jazz, Pop, Rock, Rhythm-and-Blues, Bossa Nova etc and all of the most exciting musical developments of the 2oth-century.